Star Wars: The Rise of Skywalker

So, Emperor Palpatine isn’t dead. This huge bombshell is thrown out in the opening crawl of Star Wars: The Rise of Skywalker with all the impact of a proton torpedo missing an exhaust port. If it feels like the return of the greatest villain of the decades-long story of the Skywalker family for this ninth and putative final episode should be handled with more weight, strap in – nothing means anything here.

It’s an unspoken time after the Resistance was eviscerated at the end of Rian Johnson’s The Last Jedi, and what’s left of the guerrilla force is hiding out on a remote planet. Supreme Leader Kylo Ren (Driver), aka Darth Incel, is sulking his way around the galaxy, while Rey (Ridley) is completing her Jedi training under General Leia Organa (the late Fisher, her performance seemingly completed from outtakes). Meanwhile, the bromance between ex-Stormtrooper Finn (Boyega) and hotshot pilot Poe Dameron (Isaac) is back on after they receive a message that there’s a spy within Ren’s First Order, feeding them vital information. Apparently, Palpatine (McDiarmid, sadly sleepwalking through the part) has constructed a massive fleet of Star Destroyers (don’t ask how) with his new death cult of engineers, and has offered them to Ren if he only kills Rey. Can Kylo Ren become Ben Solo again? Will Rey get over her doubts about who she is? Will everything be tied together?

Ish. Even returning writer/director J.J. Abrams has admitted that he’s not good at endings, and I’ll give him that: When he’s right, he’s right. His latest shuffle through the toy box George Lucas created manages a sin previously unknown in the franchise, in that it’s utterly immemorable. There’s a key revelation that is so spectacularly misguided that it boggles the mind that it ever made it past the first draft. It’s not just poorly handled (although that’s true), but it also makes no sense and both undoes a cornerstone of Johnson’s film and shows no understanding of Lucas’ overarching mythology that took six films to build, backward and forward.

Yes, everyone knows that the Skywalker saga has narrative gaps and leaps, but Lucas et al. always gave the viewers a launch pad, or at least little hints of clues, that allowed them to speculate without getting dragged into minutiae. Abrams – and I do not say this lightly – fundamentally does not seem to understand how storytelling works. Moreover, the first hour is startlingly artlessly constructed. Nothing has any meaning, as the heroes go on a hunt for a literal plot device, a McGuffin with a McGuffin hidden within it that will unlock another McGuffin, which is then blocked by another plot device so arbitrary that it feels purely like a setup for a gag at the expense of a beloved character. Even the Force itself is reduced from metaphysical unifier to a grab bag of superpowers. Abrams does everything that the earlier films did – right or wrong, whatever your opinion – and rehashes them in worse shape. Think “Jedi Rocks” sucks? Wait for Burning Man in space.

Would that matter in any other franchise? Probably not. After all, if this was The Fast and the Furious, Ben Solo would have turned back to a good guy somewhere around act two of The Force Awakens, and the whole mass murder thing would never be mentioned again. Instead, Abrams seemingly never grasps how to anchor the shifting inner lives of Rey and Kylo, while just leaving Finn, Chewie, and Dameron to fill time and crack jokes. It’s all about the next cool shot, the next fan-service moment, the next opportunity to crowbar in a recognizable face or add a handful of new characters we’ve never seen before – often at the expense of more established characters. Take the new, adorable, and merchandisable droid D-0: He adds nothing to the story, and simultaneously Abrams manages to completely forget about R2-D2, a feat that’s borderline miraculous.

The script never knows whether it wants to be reverential or referential, and ends up being a hodgepodge of cameos and flashbacks. Hanging threads from the first two films in this trilogy are either gallingly cut (Rose, played by Tran, is now a background character) or restored to no end. So, yes, if you wanted more of the Knights of Ren, yes, they’re back, but be careful what you wish for. For anyone crying out for an onscreen appearance by a hydra-skimmer from Doomworld, the third arc of the original Star Wars comic from 1978, Abrams has your back. If you want a movie to care about, tough.

Abrams seems to believe that the audience will forgive every shortcut because they’re Star Wars fans. But much as he left traditional Star Trek fans livid with his ham-handed revisionism on that hard reboot, here he’s even more likely to raise the ire of people who have bled these stories for decades. Sigh. Well, at least he put the proper round antenna back on the Falcon. 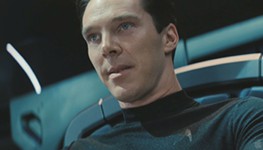 Star Trek Into Darkness
The Star Trek reboot may be overly familiar, but it's still a hell of a lot of fun.