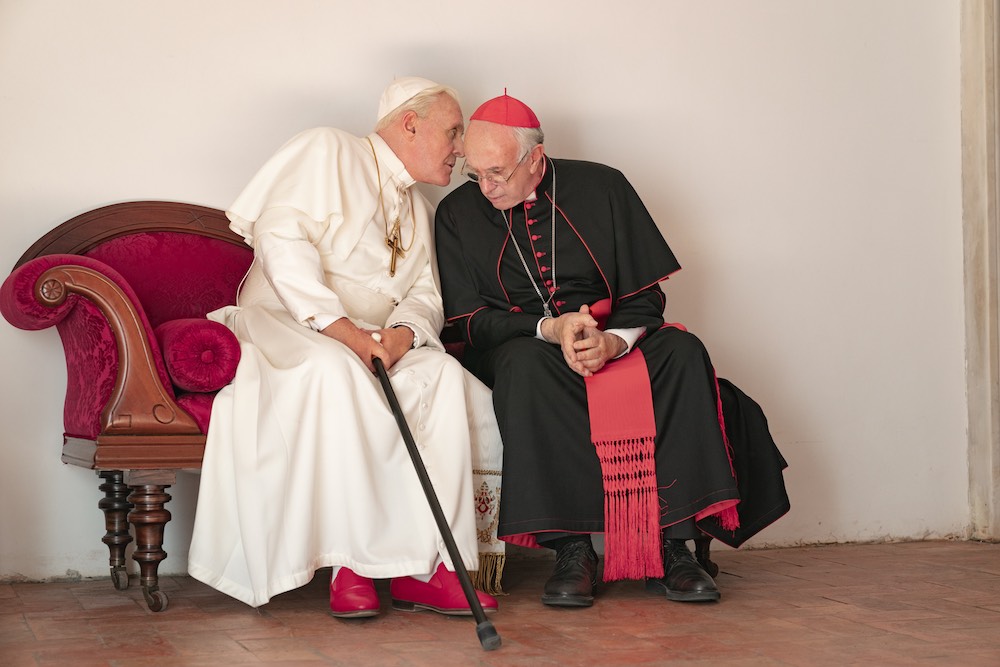 No matter what religion you may subscribe to (if any), the machinations of ritual are often utilized as an extension of faith. From early Paganism and Zoroastrianism and the tenets of Buddhism and the Eastern Orthodox Church, ritual plays an enormous role in structuring a relationship with the world, a higher power, and perhaps God. But Roman Catholicism gets the gold star for its pomp and circumstance regarding its customs and the often secret papal conclaves that promote its message to the more than a billion followers of the Catholic Church. It’s one of the more interesting aspects of Fernando Meirelles’ new film The Two Popes, these peeks into overly regimented and often extravagant ceremonies of the Vatican City being a fascinating glimpse behind the curtain.

But the meat here is the relationship between Pope Benedict XVI (Hopkins) and his ultimate successor, the current Pope Francis (Pryce), né Jorge Mario Bergoglio, an Argentine cardinal. Actually, the real heart of the story is the sparring, oh so subtle and droll, between two quite accomplished actors digging into their roles with glorious aplomb. The film is based on Anthony McCarten’s play The Pope. McCarten has apparently developed a cottage industry on biopics, with scripts for the Churchill film Darkest Hour, and Bohemian Rhapsody, both inexplicably critical darlings. I can’t imagine The Two Popes having the same cachet, but McCarten has fashioned a sly and witty script examining a kind of passing of the baton between tradition and reformation. It also plays like a religious version of The Odd Couple, or perhaps a more nuanced Grumpy Old Men.

Bergoglio meets cute with Benedict at the Papal summer home of Castel Gandolfo: The progressive Bergoglio seeks to retire, feeling out of step with the conservative path that Benedict has set for the Holy See, but the pope won't accept what he sees as a passive-aggressive snub. Initially, it becomes a stalemate, but the two men begin a dialogue on the nature of faith and the future of the Catholic Church. Hopkins and Pryce lightly parry and jab through the tenets and struggles of faith. That is basically Meirelles’ film, with forays into wandering the wonderful architecture and art in the Vatican City, and eating pizza and drinking orange soda. It’s a chamber piece that the director opens up, but make no mistake, this is two men debating the ethics of religion in gardens and surrounded by classic artwork. The two actors are in almost every frame (with some lengthy flashbacks to Minujín as a young Bergoglio, depicting his early days in Argentina). A meditation on humility and the role of faith in the modern era of secularism (the scandal of abuse among the church gets some lip service), The Two Popes showcases two heavyweight actors perfectly cast and nimbly spending the best parts of the film in debate with each other as a friendship blossoms. 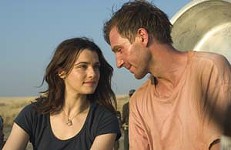 Invisible Life
Brazilian drama divides sisters from each other