I already had low expectations for Playmobil: The Movie, which in premise and execution looked like a knockoff of 2014’s The LEGO Movie, and those expectations were entirely realized. This is a vastly inferior toy-to-film IP expansion, with duller songs, dumber jokes, and forgettable voice work.

But what I didn’t anticipate was walking out of the theatre genuinely raging over the way the script (by Blaise Hemingway, Greg Erb, and Jason Oremland) treats its heroine, Marla. Played by Anua Taylor-Joy in the live-action bookends before she gets sucked into the CG-animated “Playmobil” world, 18-year-old Marla makes the self-sacrificing, honorable decision to put away her dreams and raise her younger brother when their parents are killed in a car accident in the film’s first minutes. But apparently Marla’s permanently stressed state as a tragic orphan, dutiful guardian, and sole breadwinner isn’t fun enough for the movie’s liking, and so her narrative journey is all about rediscovering her sense of play, to back before she was single mom to a bratty preteen. It’s bad enough the movie is boring and nonsensical and amounts to one long product placement, but then they’re going to pile on a fucked-up message chiding this woman for acting like an adult?

I also didn’t expect the utterly joyless Playmobil: The Movie to have one of the worst box office opening weekends in U.S. history, but count that at least as a pleasant surprise. Bomb’s gonna bomb. 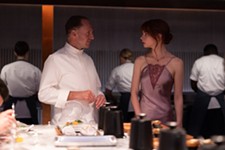 The Menu
Restaurant satire cuts into class and the culinary arts 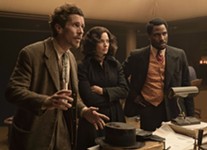