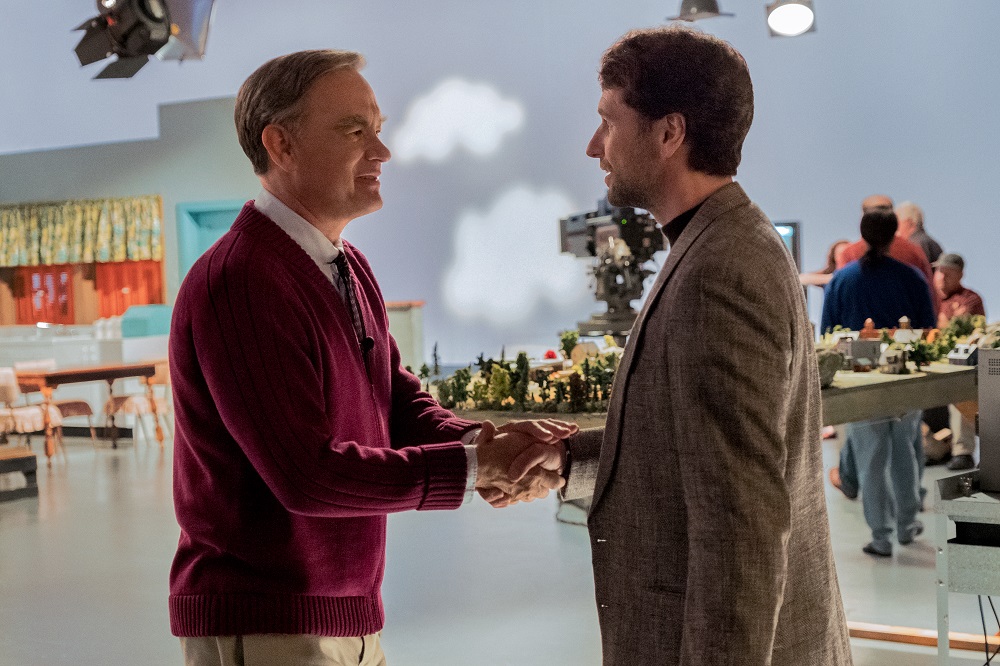 A Beautiful Day in the Neighborhood

A movie about a children's entertainer is not necessarily a film for children. A Beautiful Day in the Neighborhood may be about Fred Rogers, the creator of Mister Rogers' Neighborhood and epitome of kindness for generations of American children, but it's a mature and poignant character study – albeit one with puppets.

The true-in-spirit story is based on Tom Junod's highly lauded 1998 profile of Rogers for Esquire titled "Can You Say ... Hero?" Or rather, it's very loosely based on what writing the article meant for Junod – here heavily fictionalized as Lloyd Vogel as played by The Americans star Matthew Rhys. Junod, a hardboiled investigative journalist, came out of the reporting process touched by the experience, but nowhere near as much as Lloyd, who is carrying a huge amount of baggage – much of it left behind by his father, Jerry (Cooper), when he split and left Lloyd and his sister Lorraine (Blanchard) to care for their dying mother.

Director Marielle Heller's quickly establishing a reputation for nuanced biopics. Her last film, Can You Ever Forgive Me?, deliberately took a deeply unlikeable character – convicted faker and all-round curmudgeon Lee Israel – and tried to find ways to make her a rounded person. The challenge with Fred Rogers is the converse, but no less demanding: How do you humanize a saint?

The first, and key, decision is for scriptwriters Micah Fitzerman-Blue and Noah Harpster to not make Rogers the lead. To have done so would have been redundant in the context of Morgan Neville's incredible documentary from last year, the heartwarming/breaking Won't You Be My Neighbor? and also Jim Carrey's turn as the Rogers-inspired Mr. Pickles in HBO's Kidding. Instead, the audience learns about Fred through Lloyd, who comes in with the standard documentarian's thought process – that there must be something off about him, some skeleton in the closet, some limit to the goodness and patience and compassion of the man. Instead, he discovers that every neighborhood is Mr. Rogers' neighborhood.

Heller still frames the film through the TV show. It opens with Rogers entering that house through that door, singing that song. Cinematographer Jody Lee Lipes (The Great Invisible, Manchester by the Sea) and the team of production designer Jade Healy, art director Gregory A. Weimerskirch, and set decorator Merissa Lombardo re-create the visual language of the show, with its shoebox cityscapes and the warm fuzzy quality of the video footage. This allows Heller to drop in and out of the show and of the fantasy land of Make-Believe, where Lloyd occasionally finds himself.

Of course, everything would fall apart without the audience truly believing that they are seeing the heart of Fred Rogers: and, of course, it would be easy to write off Hanks' performance as the ever-kind, ever compassionate Rogers as a nice guy playing a nice guy. True, it would be hard to imagine anyone slipping into those comfortable tennis shoes and warm red sweater with quite the same vibrancy, but there's nothing easy about the Rogers he creates. The gaps before he says anything – initially frustrating to Lloyd – are a mind and a heart at work. But that's what Mr. Rogers was. He wasn't a simple pile of good intentions and magical best results. He knew life was hard, and he worked at it, and he worked at being Mr. Rogers. Being him was an act of will, not an accident of birth or genetics.

A Beautiful Day in the Neighborhood brings that essential essence of Fred Rogers to life. That sense of wonder, of kindness, and most importantly of letting kids – and adults – know that it's OK to have been hurt. Heller and Hanks remember that Rogers was not about being perfect, or pretending that bad things don't happen. It's about liking people just the way they are. Can You Ever Forgive Me?
True life forgery black comedy rings surprisingly true