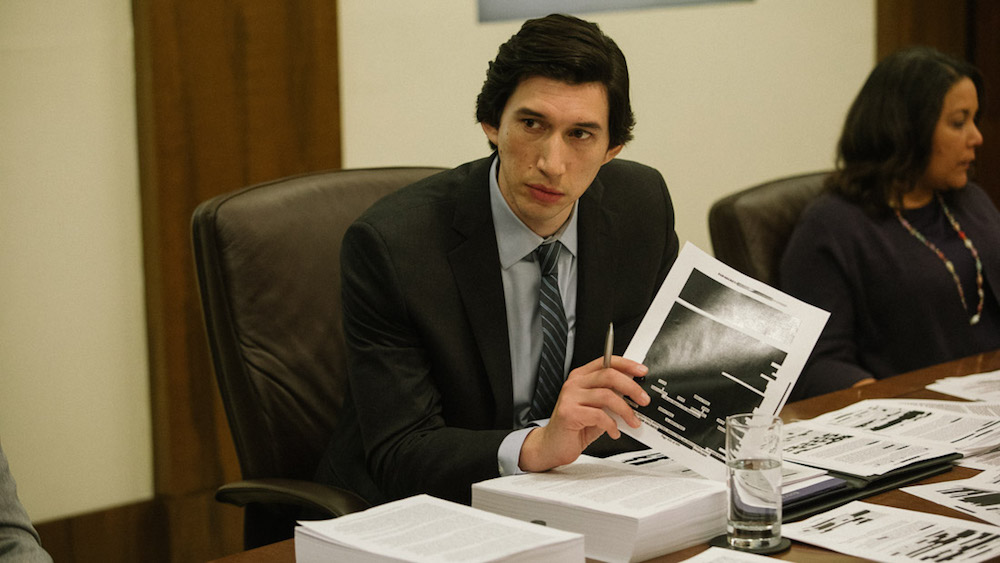 For the second time in his career (after HBO’s 2006 nuclear drama, Pu-239), screenwriter Scott Z. Burns has assumed the additional role of director for this procedural drama about the long probe by the U.S. Senate Intelligence Committee into the CIA’s use of torture in the wake of 9/11. Burns specializes in docudrama-like narratives and is best known for having written numerous screenplays for Steven Soderbergh, including The Informant!, Side Effects, and The Laundromat (which is currently streaming on Netflix).

The Report stars Adam Driver as the committee’s dogged lead investigator Daniel Jones. The film focuses on the process of unearthing the information and provides opportunities for small roles by numerous actors as relevant politicos (Jon Hamm as National Security Agency Chief Denis McDonough, Ted Levine as CIA Director John Brennan, and Corey Stoll as Cyrus Clifford). As Sen. Dianne Feinstein, chair of the Intelligence Committee, Annette Bening delivers a realistic performance. (In this saga, Feinstein may be generally remembered amongst cinephiles as one of the strongest voices against the release of Zero Dark Thirty, mistakenly arguing that the film was going to endorse the use of torture as a valid investigative technique.

Although it’s no doubt intentional that Driver plays Jones as tireless and single-minded, the overall narrative of The Report might have been helped by more character-building. Jones has no other attributes to enliven his personality, which has the result of further emphasizing the procedural aspects of the story and making the events seem drier. The film avoids wonkishness, and some cutaways to graphic visuals of torture techniques will reanimate anyone who might consider tuning out, yet the overall result seems sterile and impersonal. Indeed, these attributes may be exactly the qualities we want from a Senate inquiry. Ironically, however, these are not what we expect in our narrative features.

Considering his experience, Burns seems better positioned than most to straddle this intrinsic paradox concerning fact-based, politically charged dramas. However, in favoring datelines and details over personalities and concision, Burns does his film few favors. In general, this film is as memorable as its unembellished title.