Girls kicking ass, of course, is nothing new in the realm of action movies. Hollywood, where progress can’t happen too fast, has ever so slowly tapped into casting (mostly white, svelte) women in action films’ lead roles, from Alien’s Ripley in the Seventies, to today’s examples, like Captain Marvel. And in between these bookends – let’s say in the early 2000s – there was an uptick in female-led action flicks geared largely toward Lara Croft-obsessed teen boys, where the heroine was slicing and dicing baddies just as often, if not less than, she was peeling off those second-skin booty shorts.

Such abominations were the McG-helmed revivals of the Seventies Charlie’s Angels OG TV series, 2000's Charlie’s Angels and its 2003 sequel Charlie’s Angels: Full Throttle. To watch them today is to subject oneself to some truly cringe-inducing hallmarks of early Aughts action cinema, namely cheesy CGI and vapid pop feminism. Thankfully, in 2019, we’re spared most of that fate with Elizabeth Banks’ refreshingly updated continuation of the series and films.

By “we,” Banks means preteen and teen girls. It’s obvious from the get-go: In the title sequence, the Angels – Sabina (Kristen Stewart, in her first trip to blockbuster-landia since Snow White and the Huntsman), Jane (newcomer Ella Balinska), and Elena (Aladdin’s Naomi Scott) – are swapped for a montage of girls doing all the super-very-cool things, like skateboarding and science lab shenanigans, because, to borrow from Stewart’s opening line, “Women can do anything.” Yeah, it’s borderline eye-roll inducing (and there are a few of those moments throughout), but by the end, I’d still jump into a helicopter with K-Stew and the girl gang and right into the imaginary-for-now sequel.

One of Banks’ biggest departures from the franchise is that the trio of yore starts as a duo – Sabina and Jane – with the third Angel, Elena, coming along because she was in the wrong place at the wrong time, à la Will Smith’s Agent J in Men in Black. Elena, an engineer at a Big Evil Tech Corporation, turns whistleblower on a sustainable, Alexa-like energy generator she’s afraid could be weaponized (hello, climate crisis). A predictable twist and turn later, she winds up in punkster Sabina and ex-MI6 agent Jane’s protection and by extension, the Townsend Agency – more or less helmed by Banks’ Bosley after the retirement of another Bosley (Patrick Stewart) and assisted by Hounsou as, er, Bosley (they’re all over the world now). What follows, obvi, are all the trappings of any bona fide action flick: jet-setting around the world, cool AF weapons, and an English accent here and there for villainous measure.

For all the moments the Angels fly high, there are some real lows. The plot and pacing meanders into plodding at times, and there’s some pretty stilted dialogue along the way. In fact, all three of the Angels’ backstories are so thin that the viewer can never really grasp just what these characters have to lose – besides their lives or jobs, that is – which is ultimately what makes for an engaging narrative. And the CGI explosions still look kinda crappy.

Still, even in an era where millennials have been treated ever more to women (hashtag BossBabes) on TV and in film getting ish done, it feels like the next generation was left out. Banks, whose direction and screenplay make her the first woman to helm the franchise, very much wants young girls to see themselves in these Angels. Charlie’s Angels isn’t revolutionary by any means, but for today’s Gen Z, it’s a jumping-off point. 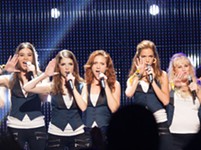 Pitch Perfect 2
Lightning may not be rebottled the second time around, but it's still a toe-tapping good time