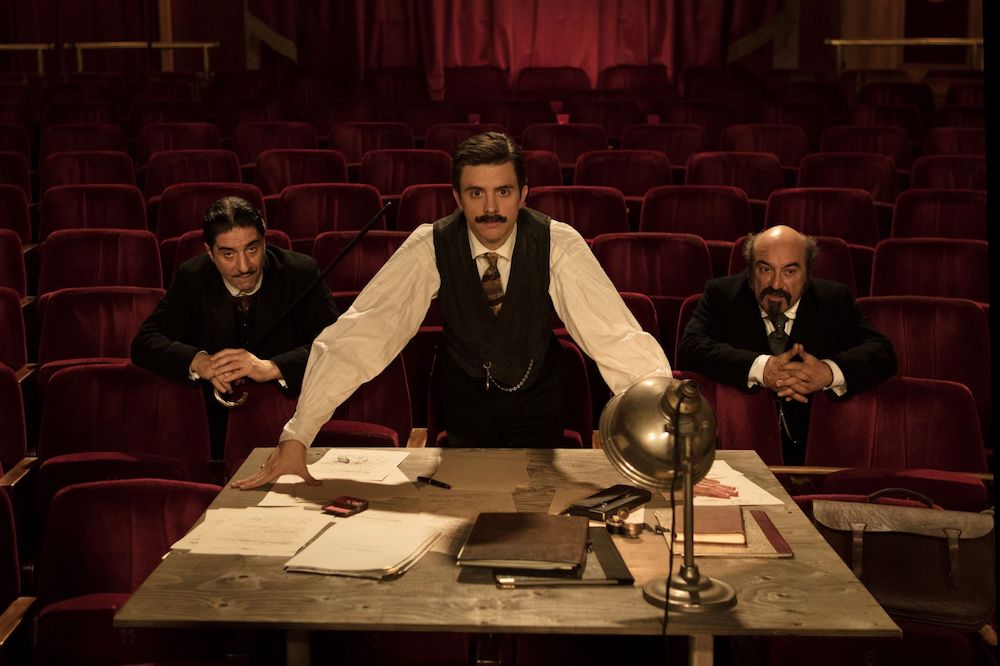 Cinema will always have an obsession with theatre. As its heir, sibling, and occasional usurper, movies will often take a loving of slightly goofy look at the creative process for the stage. Whether it’s broad spoof like Noises Off or quasi-historical recreations like Shakespeare in Love, there’s an urge to connect backstage antics with the action on the stage. In the case of French backstage farce Cyrano, My Love, it’s a fanciful version of the events leading up to the first performance of Edmond Rostond's tragicomedy Cyrano de Bergerac.

The time is December, 1895 – a moment of great turmoil and change in France. Sandwiched between the first powered flight and the first working car, the Drefyus scandal is in full fury, and Sarah Bernhardt is on stage at theThéâtre de la Renaissance in Paris, performing in La Princesse Lointaine – a new piece by the up-and-coming Rostond. Of course it’s a flop, and the poet (played wide-eyed and beaten-down by Solivérès) is only more convinced of the death of the stage and his own career when he happens to wander into one of those dangerous new moving picture endeavors.

This is two years before the one-time enfant terrible of French letters became a full-blown legend when he wrote the play Cyrano de Bergerac, and began his career-changing relationship with Constant Coquelin (Gourmet). All of this is far from planned. Both men need a hit, but Coquelin is putting all his faith and financial future in the hands of a man that’s barely put pen to paper in years. That’s a little bit of a stretch on the historical details, but fantasy takes over when Rostond’s friend Leo (Leebs) falls for Jeanne (Boujenah), an actress in a rival company. Leo’s a good chap, if a little unsubtle and broke, and so he begs Rostond to provide him with the words he cannot think of himself. Just like in the play that will be his salvation! But wait until his wife finds the letters that he’s sending to Jeane on Leo’s behalf! Oh, the miscommunications and confusions! Fortunately he has friends like Monsieur Honoré (Martial), a black Parisian who supports Rostond’s ambitions while contending with petty-minded racists.

There’s the normal intrigue and theatrical sniping – much provided by the two Georges of the fin de siecle French stage, Feydeau (Michalik) and Courteline (Bellecour), who serve the same smugness-before-the-fall function as Paddy Considine and Rafe Spall in Hot Fuzz. Overall, there's a delightful, silly giddiness to the affair. It’s also painfully traditional, and Michalik misses an opportunity for something new by having Rostond’s wife, Rosemonde Gérard (de Lencquesaing), as the traditional somewhat-supportive, somewhat-nagging wife. She was a successful poet and playwright in her own right – plus, in what could have been dramatic irony ripe for the plucking, considering Rostond’s concerns, she had a fine career as a screenwriter for those pesky films.

That Cyrano, My Love could have been released any time in the last 30 years is hardly its greatest sin. What makes it at least a little more contemporary is that it at least touches on the central problem/dynamic of Cyrano, of manipulating an unwitting woman’s emotions. That’s doubly-complicated here by Rostond being married. It would almost be less awkward if the script had kept to its witty, literary, farcical core, and didn't so overtly define the women in Rostond's life as there to define his successes. Instead, it's absolutely at its best as a predictable if pleasurable story of unlikely success. In those slight and joyous moments, this Cyrano is definitely something to touch the heart.