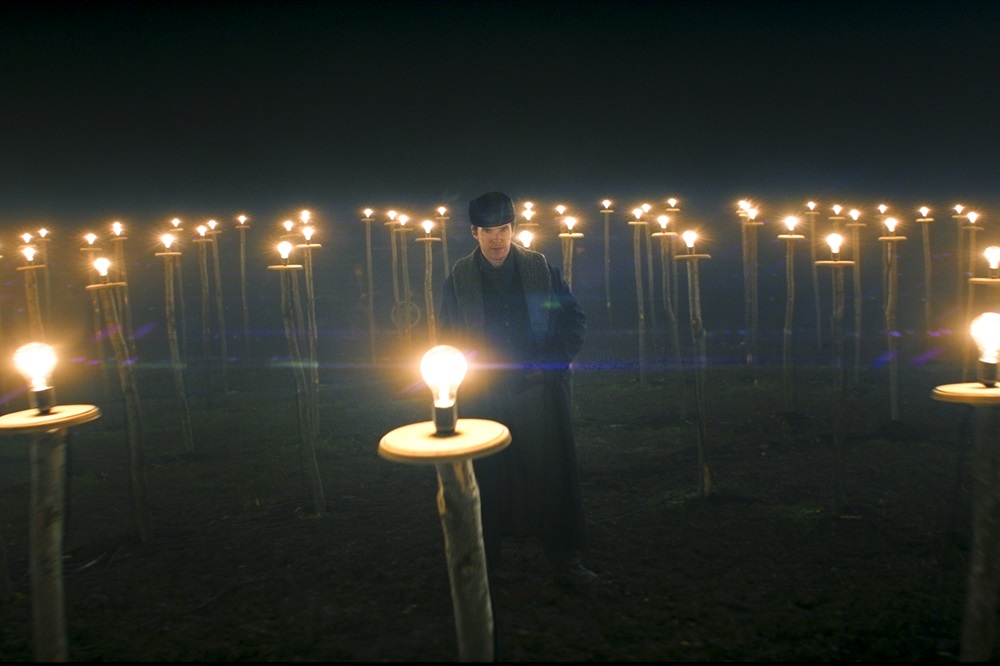 The modern era began with a snub. The brilliant, charismatic Thomas Edison (Cumberbatch as a vast personality, barely contained within the frame) decides to go home, rather than stop his personal train for a planned dinner with fellow innovator George Westinghouse (Shannon, bluff and cunning). It's one of the great change moments in history, as both men plunge deep into the battle to electrify America. Edison put his genius behind a direct current system, one that would demand a power station every mile; Westinghouse opted for the technological risks and greater rewards of alternating currents. They rarely crossed paths: Instead, they fought to be the one to bring light to a dark world.

The Current War is a remarkable period piece, one that evokes the transition from the era of soot and gaslights to the luminescent era. The script by Michael Mitnick does not take sides, instead letting the two forefathers of the age of amperes jostle for a multitude of reasons: commerce, ambition, greed, intellectual drive, hubris, and a genuine aim to make the world a better place.

It's a story of moral compromises and unpredictable outcomes, with the focus directly on the entrepreneurs – both of whom had a habit of catching people up in their wake. Middleton and Watterson are confined to the sidelines as Mmes. Edison and Westinghouse respectively, while the story rips through a coterie of investors, courtiers, and rivals – most especially Townsend as Westinghouse's loyal friend Samuel Pope, Holland as Edison's assistant and future Wall Street giant Samuel Insull, and Hoult as the also-ran genius of the story, Nikola Tesla.

It's a narrative firehouse, but Gomez-Rejon knows exactly how much detail is needed. The story is loaded with technical details about filament construction, but only ever enough to bring the audience up to speed about the latest point of tension, as the rivalry barrels toward two pivotal events in 1893 - the first execution by electrocution, and the World's Columbian Exposition, aka the Chicago World's Fair. It's a masterclass of showing, not telling, and that's not just in Shannon and Cumberbatch's understated performances. It's the way Park Chan-wook's regular cinematographer Chung Chung-hoon catches the transition from Edison showing off bulbs in a muddy field at night to the new illuminated world. It's the way that the score by Hauschka and Dustin J. O'Halloran – part neoclassical, part traditional chamber - enhances the tension of the chase to reshape the world.

And yet, if there is a flaw in the design of The Current War, it is that it is too breathless. Gomez-Rejon has dared to make a truly kinetic film about the past, one that never dabbles in creative anachronisms but feels like a truly modern view upon a bygone time. The breakneck pacing is an absolute part of the film, but it could be so much more filled out. Honestly, if this is the director's cut (an earlier version, originally planned for release by the Weinstein Company, ran 10 minutes longer but with fewer scenes), then the grandeurs of the story could readily be opened up into a miniseries. The battle between Edison and Westinghouse over who could sign over the greatest number of cities to their rival systems seems rushed – but then Mitnick's script is designed to be a blur. This is a world to be engulfed by, a vision into the psyches of the men who built the modern world. It is not hagiographic, or condemnatory. Instead, it is performance as portrait, as their subtly revealed flaws are as responsible for their ascent as their creativity and perspicacity.