Anthology films can be tricky. At one end, there are the disconnected shorts, bolted together through an unwieldy framing mechanism. At the other, the portmanteau (such as Trick'r Treat and the upcoming The Mortuary Collection), where the stories-within-stories add to the texture and create one singular vision. Horror-SF anthology Portals sits in the mid-realm, where a diversity of voices sometimes creates a choral effect, and sometimes descends into discord.

The triggering mechanic for Portals is the sudden appearance of a series of black, mirror-like slabs – more cellphone than 2001 monolith – around the Earth. Where did they come from? What are they doing here? No one can really tell, and everyone's experience seems different. Some hear them calling, some feel a physical pull, some disappear into the abyss within, some become zombies.

Hardcore anthology horror fans will possibly be reminded of 2015 time loop terror anthology Southbound, where the framing mechanism didn't always add the cohesion a pormanteau anthology like this needs. That film pulled in much of the talent from V/H/S (the grandaddy of the current anthology boom), while Portals is basically a reunion of the V/H/S/2 team with three of the sequel's seven directors on board. Eduardo Sánchez (The Blair Witch Project) and Gregg Hale codirected that film's "A Ride in the Park" segment, and now they split the opening "Call Center" sequence between them – which is a minor miracle, considering it only lasts about 15 minutes. It's a slight piece, but well-executed, as a room full of 911 call center operators try to piece together what's happening – just as it starts happening to them. It's intriguing and claustrophobic, if scarcely groundbreaking.

The simplest sequence narratively, if not visually, is "Sarah" by Timo Tjahjanto (The Night Comes for Us): as in V/H/S/2's "Safe Haven," his job is to go gonzo action gore, and he does so with glee in an action-packed single shot of two sisters being pursued by portal zombies through a parking lot. Yet by comparison to "Safe Haven" and its Satanic panic craziness, this feels like a well-executed stunt reel.

The big addition to the team is Liam O'Donnell (who shot much of Beyond Skyline in Tjahjnato's home country of Indonesia) takes on "The Other Side." By far the longest story, it follows Adam (Hopkins) as a man who ends up halfway through the portal, and capable of seeing both sides of reality. It's pure O'Donnell, with his predilection for putting ordinary folks through a cosmic body horror transformation. It's the segment that feels closest to a complete film, and dominates the run time, while reaffirming O'Donnell as an action-horror director who isn't afraid to pummel his human protagonists.

But does it all hang together? Somewhat. Portals feels like a first pass at a bigger idea, and a framing mechanism that takes a wild series of closing turns sets up a much bigger – and darkly interesting – universe. In that way, Portals promises more in future than it delivers here. 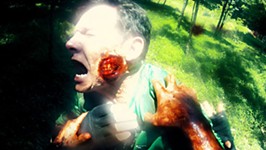