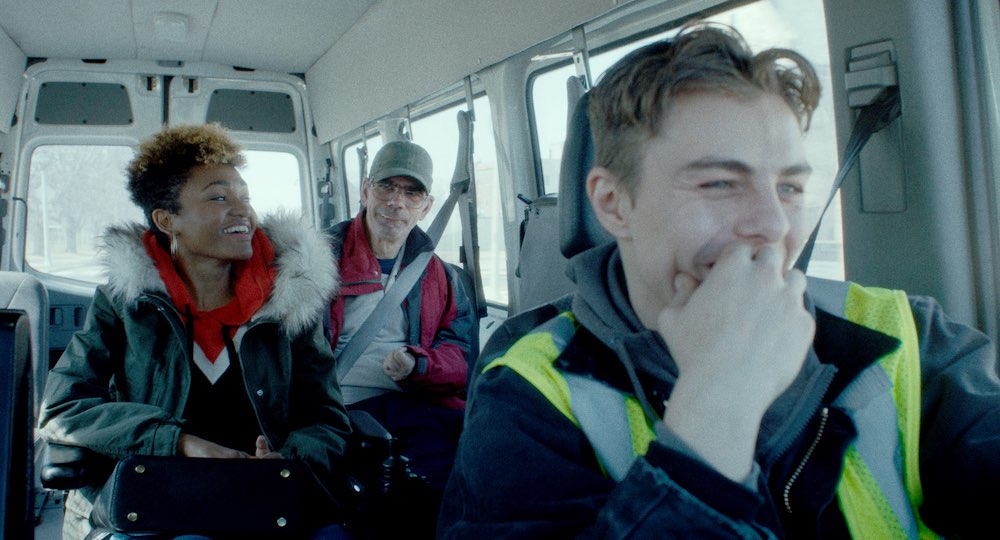 The AP Stylebook, the journalist’s friend, posits that a writer generally should avoid descriptors that denote pity. That is why it is incorrect to say someone is “afflicted with” or “suffers from” a disability (it’s also just quicker and more efficient to say someone has a disability). Kinetic comedy-drama Give Me Liberty reinforces the concept that living with a disability does not mean a reduced quality of life.

As the script from co-writers Mikhanovsky and Alice Austen gathers an unlikely group – a gaggle of funeral-bound Russians, a black woman just trying to get her client to an appointment, and a chronically late bus driver – and boards them all into a medical transport van in Milwaukee, Wis., they know what they are doing. This grouping of marginalized misfits seem to allow each person to bring their own quirky humanity wholly to the table (or, rather, van) with little room for apologetics, social niceties, or bureaucracy, allowing the film to reach for something true.

Although, before the audience can appreciate this, the script is designed to break desire for any didactic preaching, any relaxing resolutions, or linear plots. Mikhanovsky and Austen continually beat the audience over the head with illogical and questionable twists and turns, ultimately forcing them to either take on the same “roll with the punches” attitude as the characters or suffer through nearly two hours of chaos.

While there are little to no so-called victories in the film (which premiered this year at Sundance), the casting and location are huge successes. Set in one of the most segregated cities in America, the van serves as the perfect vehicle, both literary and literally, to cross untouched racial divides. The casting of actors with disabilities for every character with a disability is another point of success for this film, uplifting leading actress Lauren Spencer in her work as Tracy, a disability lifestyle influencer.

Give Me Liberty’s biggest victory is in avoiding depicting able-bodied driver Vic (Galust) as the shining knight-in-armor savior, or sacrifice the other actors as props to inspire able-bodied audiences. It was likely from Mikhanovsky’s own experience driving a medical transport van that he was able to tap into the complexity and full humanity of the different characters and thus, manifest a greater truth.