Beauty is only skin deep, the saying goes, but mundanity goes to the bone. Mabel (Teeth's Weixler) is an actress slumming in a B-movie. Weixler is, by any conventional measure, beautiful. Blond, striking in a charming way, an elegant bone structure – the absolute opposite of her leading man, Rosenthal (Pearson). Pearson has neurofibromatosis type I, a condition that can affect skin pigmentation and, as in Pearson's case, lead to the growth of large, benign tumors. You'll recognize Pearson as the man with the large growths on his face who gets seduced and consumed by Scarlett Johansson's alien in Under the Skin.

That you know Weixler and Pearson as Weixler and Pearson is part of the layered metanarrative of Chained for Life. The title itself is a reference to a 1952 exploitation flick starring Daisy and Violet Hilton, famous conjoined twins, which indulged in the grossest hypocritical prurience (how do they do it? the script constantly whispers). The film within Chained for Life is your standard post-Hunchback of Notre Dame narrative about the heroine rescued by society's reject, the gold-hearted monster, blah blah blah. But Mabel and Rosenthal are just two jobbing actors, getting along in that "temporary friends" fashion that defines a movie.

Altman-esque in its disjointed narrative but clear as day in its complexity of vision, Schimberg's film works best in its individual scenes, and scenes within scenes: a campfire discussion about cosmetic and reconstructive surgery; the director forcing Rosenthal to do take after take after take of one shot; actors and makeup artists engaging in absurd self-flagellation over the slightest peach fuzz turning them into a bearded lady; how all the cast members with any kind of disability are forced to stay in the hospital overnight because ... well, something about the hotel and ADA compliance. That's a deliberate structural decision, as the script (by Schimberg) is constantly tricky, constantly writing and rewriting itself, turning scenes into films within the film within the film. That makes it hard to know whether anything is "real," per se, or whether this is just another tableau making another point about society and beauty, or cinema's use of disabilities and imperfections to signify weakness or evil or inhumanity.

But Schimberg isn't simply engaging in didactic lecturing. There are no real cardboard villains (beyond societal pressures about what is normal and the occasional moment of condescension by well-meaning cast and crew, blindly stockpiling an arsenal of micro-aggressions). Instead, it's an exercise in immersion. Take the sequence of Rosenthal and that one shot. It's five minutes of a close-up as he walks in and out of shadow. It's the prolonged look at an extreme iteration of a human face. It's a moment for the audience's inherent curiosity to be sated, to look at every bump and lump, the scars, how his eyebrows grow, his ears droop. And once that curiosity is sated, the camera stays there, and the audience simply watches Pearson's performance. It's not about ignoring his face: It's about seeing him in his entirety.

If the point of Tod Browning's Freaks was that it's what's inside that makes someone a monster, Chained for Life finds that everyone is awkward, everyone sees their own flaws, and everybody is just somebody. 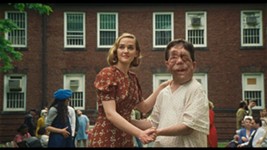