The Death of Dick Long

Rule one. When your best friend says, "Hey, y'all motherfuckers want to get weird?" just say no, kids. You don't want to end up like Dick Long.

It's not just that Dick (director Daniel Scheinert pulling curtailed double-duty) is dead, or that his friends Zeke (Abbott Jr.) and Earl (Hyland) just dumped him in front of the local hospital. It's exactly how he died, a mystery that sets the ill-prepared local cops on a trail of what they think is murder.

Would that it were so easy. The exact nature of the demise of Dick is tearing good family man/overgrown teen Zeke up inside (Earl would just rather leave his trailer park home on what the locals dub Meth Mountain). Of course he knows more than he's letting on, and when all the pieces fall into place, it's clear why.

It's easy for an archetypical arthouse film audience to laugh at truck-driving, John Deere cap-wearing, Nickelback-loving, good old boys, and Scheinert (one half, with Daniel Kwan, of the Daniels, creators of the equally corpse-centic Swiss Army Man) isn't always afraid of making his characters look a little ridiculous. There were a few shots of small-town life that seem absurd, but also ring true (not least because the Alabama native drew them from observed fact). Those moments that play a little too broad and a little too "let's laugh at the hicks" don't detract Scheinert's real skill, that he can take something that shocks, something that will create a real, visceral response in the audience, and still find a way to illuminate the characters. He understands the difference between sympathizing with a character and empathizing with them; that's vital, because when the last clue drops, it would be easy for an audience to wash their hands of Zeke and Earl. Instead, they remain the same weak, friendly, believable guys they have always been. It's a perfect example of hating the sin and punishing the sinner without hating them.

Of course, there's a hint of the Coens about the small-town antics (although its hard to see Joel or Ethan leaning into the final act's emotional honesty). Their influence is strongest in the cops, with Cochrane as the cane-carrying, Malibu-and-pineapple-sipping sheriff and Baker as her daydreaming sidekick who just wants to get home to her wife and the quiche that she's made. Yet most filmmakers who try to tread in the Coens' footprints simply fall over their own shoes: Scheinert understands that they keep their characters, no matter their sins, in some sense of grace.

Scheinert also really comes into his own as a visualist: Or rather, separated from Kwan, it's easier to see what he brings to their complicated, kinetic style. There's a lightness, a lyricism that will make you look at some shots in Swiss Army Man and say, "Oh, that's Scheinert."

Yet it's really as a director of actors that he's a revelation. Abbott never lets the audience walk away because they have already spent so much time – if not liking him, at least understanding him. We're right there with his wife, Lydia (Newcomb, extraordinary in what could have been a cipher of a role), when her world starts to fall apart. Dumb and evil may be different, Dick Long says, but it doesn't make the damage hurt any less. 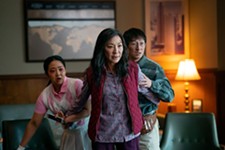