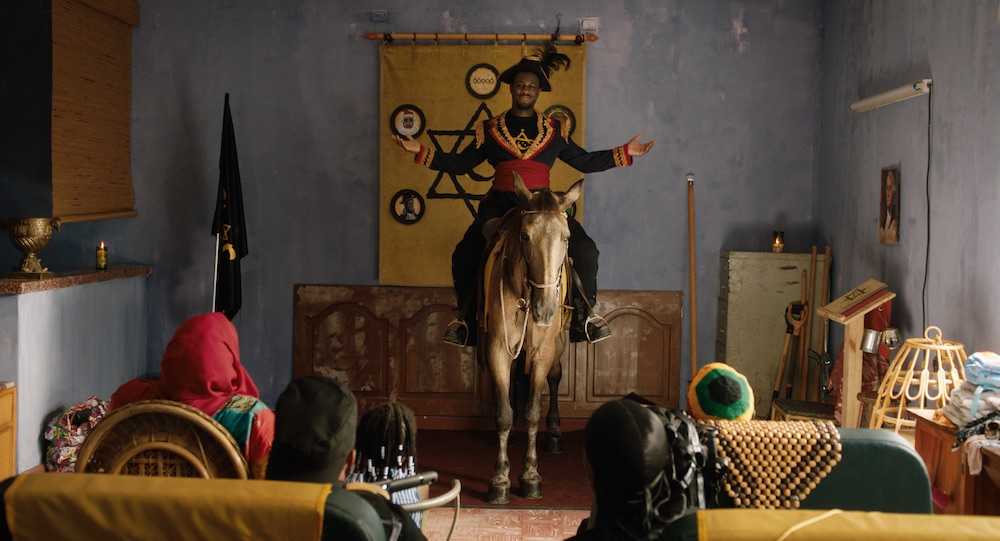 The Day Shall Come

In his groundbreaking and brilliantly confrontational news spoof Brass Eye, British satirist Chris Morris would in each episode take(down) a hot-button topic, reflected in the title: “Sex”; “Drugs”; “Crime”; etc. If his new tragicomedy followed that model, it would be called “Security Theater.”

Like his feature directorial debut (the acerbic Four Lions), The Day Shall Come finds itself narratively at the confluence of idiocy and fear. However, rather than the wannabe jihadis of his first film, now Morris tracks a more affable cadre of bumblers: urban farmer Moses (Davis) and his Star of Six church. That’s where he preaches to a congregation made up of his wife Venus (Brooks) and a handful of friends about his very unique theology. It's a mix of nonviolent black liberation, mysticism, 1970s psychobabble, and a dedication to Black Santa, all based on God talking to him through a duck (Moses’ delusional mental health issues are dealt with, as is Morris’ way, with both humor and sensitivity).

Morris’ core thesis has always been that everyone is an idiot, and that it’s the idiots with power that are totally dangerous. Enter the South Beach FBI, who have become caught in an endless, ridiculous string of sting operations that catch nobodies who can be flipped to take part in the next sting operation to catch nobodies. Agent Kendra Glack (Kendrick, perfect for delivering Morris’ scathing commentary as the only marginally self-aware character) thinks Moses could be the case that finally delivers. On what, she’s not sure, but with a few nudges and the right kind of entrapment, who knows?

Based on what the opening card refers to as "a hundred true stories," the raw insanity of how these cases play out – fake global terror threats as FBI busy work – means Morris underplays his normal absurdist tendencies. Instead, he balances the ridiculousness of the situation with the sheer, raw, ire-inducing unfairness of a process that makes and arrests fake terrorists. It's what allows a sleazy pedophile (What We Do in the Shadows' Novak, also a veteran of Four Lions) and a bunch of low-level crooks dressed as stereotypical Arabs to be used to implicate a person with mental health issues that, as Glack puts it, has the threat profile of a hot dog.

Morris has always hidden his political insight under sometimes broad and always brilliant comedy (and for anyone running to make Veep or The Thick of It comparisons, Morris is Armando Iannucci’s peer, not his follower). His genius is in demystifying terrible politics by stripping them down to their basic drivers: greed, weakness, stupidity, ego, delusion. Inspired by real-life cases of law enforcement seemingly radicalizing young men (always of color) just to have a radical to arrest, The Day Shall Come is a bold, compassionate addition to his work. It’s one that makes the audience root for Moses – a literal “holy fool” – but never lets them forget that he’s up against the great machines of governance. It’s not if it goes wrong for him, but when, and how badly.