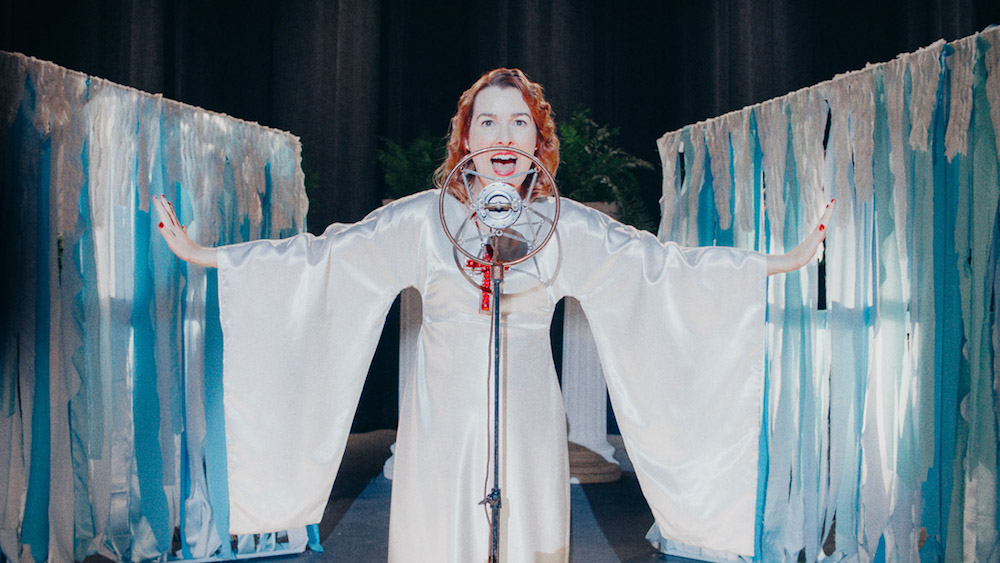 It’s fitting that this movie about the 1926 disappearance of the famous evangelist and faith healer Aimee Semple McPherson pulls off a small miracle of its own. Sister Aimee is a scrappy period piece that supplants the things a bigger budget might have afforded with good choices about things that were under the filmmakers’ control.

First is the choice that co-writers and -directors Samantha Buck and Marie Schlingmann made to tell a story about such a compulsively fascinating historical figure as Sister Aimee. Next, they relieved themselves of factual quibbles regarding their speculative (although well-informed and credible) treatment of McPherson’s blasphemous activities during the time of her divine “evaporation”: The opening preface amusingly states that only 5.5% of what we are about to see is true. But the pièce de résistance is the outstanding performance by Austinite Anna Margaret Hollyman as the titular holy woman and virtuoso arena artist. It’s a part that requires Hollyman to convince us of the character’s contradictory saintliness and saltiness, cunning, cupidity, and carnality. Her Sister Aimee emerges as a character of even greater mystery by the end of the film.

Rumors ran wild at the time of Sister Aimee’s reported evaporation while swimming in the waters of Southern California. At the time, she was America’s most popular evangelist, having surpassed the fame of Billy Sunday as well as becoming a modern media pioneer with the radio broadcasts of her sermons. Americans were on the lookout for McPherson, and sightings were reported from coast to coast. She was one of the most famous people in the country and her home and megachurch location in the shadow of burgeoning Hollywood imbued her with even greater star quality. Yet as Sister Aimee opens, the filmmakers show us some of the reasons why it might have been a good time to fake a disappearance: declining attendance, an overbearing mother (White), boredom, lust, and/or a longing for a less morally circumscribed life.

Sister Aimee hypothesizes that the once-widowed and once-divorced evangelist headed for Mexico with a paramour (Mosley) and, after the pair discovered that there was an active search for their whereabouts, the lovers enlisted the help of a guide named Rey (Suarez Paz). The film wanders a bit after the introduction of this character, steering the story in the directions of gunrunning and tall tales about Mexican revolutionaries. By the end, the two women are united in unlikely bonds of sisterhood.

Structurally, the details of McPherson’s life and disappearance are meted out through an ongoing series of interviews conducted by the investigating detectives (DeLong and Merriman) with her family members, associates, and ex-husband (Blair). Through them, we gain an understanding of the many facets of Sister Aimee’s personality, as well as the nest of vipers slithering among her supporters.

Our present times provide a highly suitable backdrop for this film’s themes of celebrity, hypocrisy, and the filing of false police reports. Our daily news is now populated with conversations about the lies told by our elected officials. Known facts have become material for disputation, and truth has been rendered a relative notion. Witnessing the turnaround from victim to perpetrator in the story told to police by Jussie Smollett can’t help but bring the Aimee Semple McPherson fabrication to mind. Along with helping to invent the modern megachurch, celebrity pastors, televangelists, and performance art, McPherson is also a progenitor of the wild goose (that laid the golden egg) chase that has proved irresistible in our modern media age.

A version of this interview ran as part of our SXSW coverage. 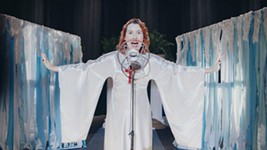 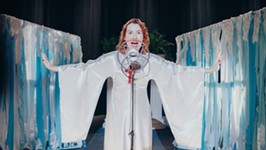