Movies that try too hard are like pornography: They’re not always easy to describe, but you know them when you see them. These are films that pretend that physical affectations and character development are one and the same; if you’re particularly unlikely, you might also find a sea of look-at-me moments wedged into a thin storyline. What makes a movie like Villains so special isn’t that it avoids these precious moments – it’s that it trusts its cast enough to lean right the fuck into them. There’s nothing wrong with turning the dial to 11 as long as your actors are along for the ride.

Mickey (Skarsgård) and Jules (Monroe, It Follows) are not particularly gifted criminals, but that hasn’t stopped them from knocking over a string of gas stations on their way to the Florida coast. In fact, things look great for them – until their car breaks down in a secluded neighborhood on the outskirts of town. Armed only with a pile of cash, a bag of drugs, and their own half-functioning wits, the two decide to rob a local house and muscle the homeowners into giving them the keys to their car. Instead, they find themselves caught between a little girl chained in the basement and a white-collar couple (Donovan and Sedgwick) with a flair for psychosexual violence.

Like most black comedies, Villains demands that its actors take big swings in their performances. Skarsgård and Monroe are an unconventional pairing – the former is known more for his dead-eyed monsters like It's than his leading-man charm – but here they are delightfully in sync as a pair of coked-out lovers using self-affirmations to navigate a life of crime. Despite a near-constant state of manic energy, both actors imbue their characters with a tremendous amount of heart. Donovan and Sedgwick, on the other hand, form a fractured vision of Fifties American values. Donovan seems completely at home with the film’s slippery concept; all Southern charm and hints of violence, here he plays the kind of dangerous Southern oddball typically reserved for an actor like Walton Goggins. The result is intoxicating. Had Bonnie and Clyde murdered their way into middle age –  and struggled with fertility issues – they might have ended up a little something like this.

At its best, Villains feels like a clever mash-up of Nineties neo-noir, pitting Lynchian psychosexuality against the flurry of Pulp Fiction knockoffs from the decade’s latter half. By all rights, that should be an exhausting combination – and there are a few scenes where the film threatens to wear out its welcome – but what keeps the dark fun moving forward is the care put into developing each couple. These might be violent, melodramatic love stories, but they are still love stories; each relationship has a lived-in quality that allows Berk and Olsen to draw fascinating parallels between couples old and young. It may be a film that rubs some the wrong way – those who hate Villains will hate it with a fervent passion, I fear – but for everyone else, this is quite the lovely little oddball. 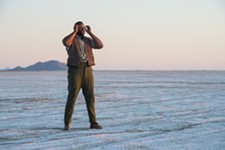