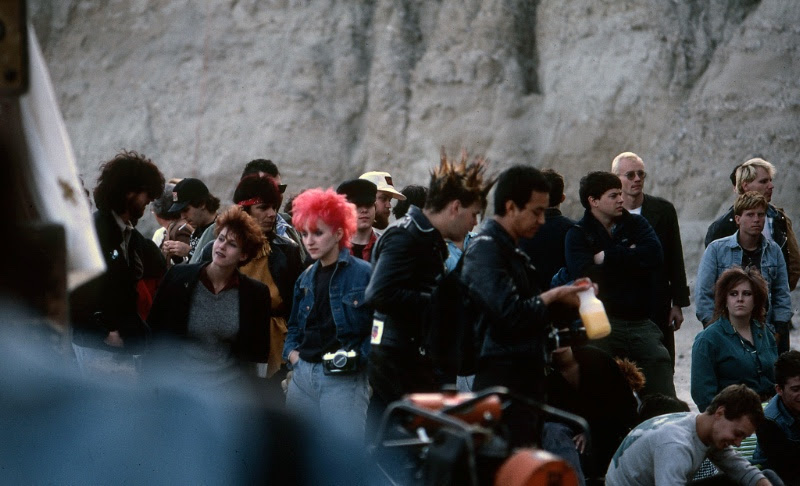 We take for granted the corporatization of music festivals these days. Coachella’s $999 VIP tickets, Lollapalooza’s equally exorbitant facets, and Burning Man’s near-total devolvement into a celebrity- and millionaire-haunted festival. They have become canny product placement and capitalistic, mega-revenue generating events that only those with enough disposable income at their fingertips can attend without having to worry about much more than staying hydrated and finding the least gnarly port-a-potty in the middle of the night while rolling on Molly or tripping balls on acid, good, bad, or otherwise. It was not always thus. Stuart Swezey’s important and electrifying documentary recounts the chaotic birth of what he dubbed the (now legendary) “Desolation Center” concerts-cum-happenings-cum-anarchy-crazed outings into the far backcountry of the Mojave Desert. They lasted for just two years but laid the foundations for those aforementioned music and art gargantuas.

In 1981, Swezey, a 23-year-old Los Angelean music fan, caught a gig by infamous industrial outfit Throbbing Gristle, which by his own admission “changed my life forever." It may have been Ronald Reagan’s “morning in America,” but Swezey, who had decided to become a music and show promoter, was – along with everyone else involved in the Los Angeles punk scene at the time – coming under heavy scrutiny from notorious LAPD Chief Daryl Gates. The cops instigated riots at Black Flag and other L.A. punk shows, forcing the relatively intimate scene to make do with fewer venues to play in the city proper. Swezey and his partner Bruce Licher of Savage Republic hit upon the then-unique idea of throwing their own brand of concerts three hours south of L.A. in the scorching desert, kicking off what would be a brief but hugely influential series of just four of these “happenings” on April 23, 1983. The “Mojave Exodus” involved bussing in bands, punks, artists, and assorted gear – generators that turned out to be nearly too weak – into the desert for a day and night of raucous, druggy squall backed by a soundtrack from the Minutemen and Savage Republic. Then Swezey went backpacking through then-divided Germany, made friends with seminal Berlin-based industrial noise godheads Einstürzende Neubauten, and when they came to LA, he set up the second Desolation Center event in a box canyon outside of Mecca, California (ironically just a few miles from Indio where Coachella exists today). Inspired by Werner Herzog’s Fitzcarraldo of all things, he roped in San Fransisco-based metal machine maniacs Survival Research Laboratories, and on March 4, 1984, “Mojave Auszug” commenced with SRL in full disaster mode, attempting to blow off the face of the canyon with high-power explosives (the mountain won) while Einstürzende Neubautan screeched and clattered in the background.

Remarkably, people loved the wild interplay of punk, performance art, and industrial music set against the backdrop of the majestic and potentially dangerous desert. Of the many talking head interviews conducted for this doc, all agree it was a magical, life-changing experience, despite the heat and any sort of on-site medical professionals should anything go horrifically wrong. As musician Janet Housden recalls with a fond smile, “People in their 20s are sociopaths. All of them.”

Employing contemporary interviews with those who were there and a wealth of raw footage from the original events, Desolation Center illuminates a short-lived but absolutely momentous time when the Mojave beckoned, free of charge and front-loaded with anarchic artistic overload. Watching Sonic Youth blaze through their song “Death Valley 69” against the backdrop of disorganized yet ecstatic chaos, you’re reminded that these desert micro-tests once upon a time had real teeth and zero air-conditioned VIP tents. To me, that sounds like a helluva lot more risky fun than anything Coachella founder Gary Tovar has unleashed since that mega-fest’s inception. Long live Desolation Center, even if it now exists only in the memories and footage of those lucky enough to been there.