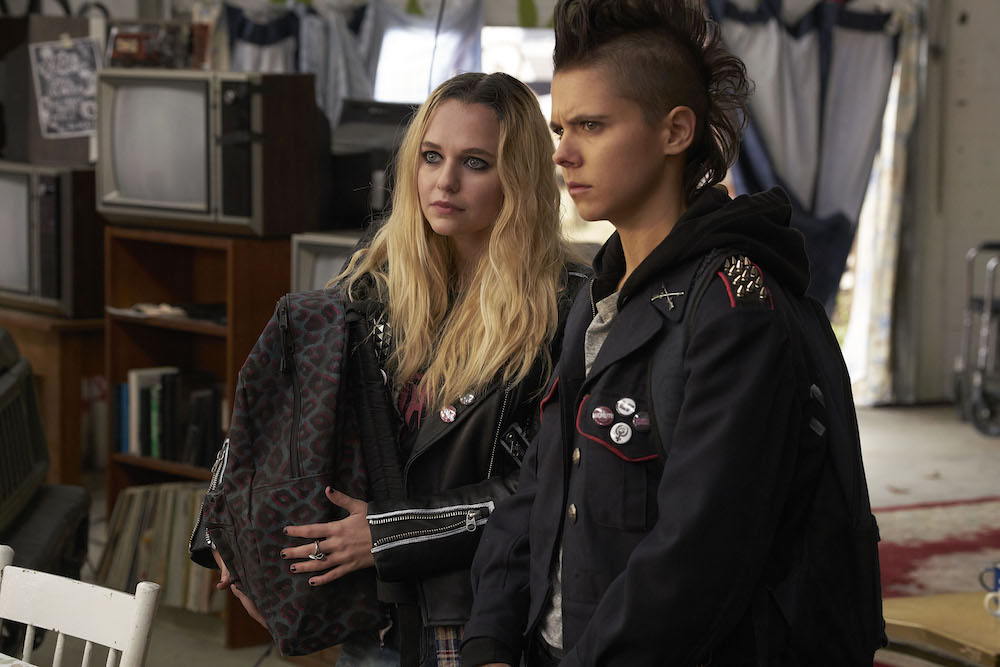 Part postapocalyptic John Hughes jocks versus The Outsiders and part queer-friendly actioner that pulls zero punches when it comes to gray class warfare, this debut feature from the former editor of Canadian genre mag Rue Morgue is a stylish and viscerally heartfelt ode to teen rebels, misfits, and LGBTQ outsiders everywhere. The fact that it’s set in 1995 after a mysterious plague wipes out all the adults makes it an even more dystopian take on teen anarchy than Lord of the Flies – albeit with varsity-jacket-clad, musclebound meatheads. They're dubbed the “Titans” (their former high school mascot, one assumes) attempting to impose a jock patriarchy via psychotic “pep rallies” that double as public executions for those that don’t follow the orders of leader Jeremy (a charismatic Chambers) to the letter.

With its all-female direction, editing, cinematography, and a tight little script by Katherine Collins, Riot Girls literally takes many of its cues from the mid-Nineties riot grrrl scene birthed in Portland and Seattle. Opposing the Titans' bloodthirsty attempts to take over the unnamed and unparented town’s social order are mohawked punk badass Scratch (an amazing turn from Kwiatkowski) and her prom-queen teen dream best friend Nat (Iseman), who ultimately prove to be every bit as canny and, when necessary, vicious in their retaliatory strikes against the privileged, hypermasculine Titans. A sweet subplot involving their beloved puppy adds a note of tenderness to what’s actually a surprisingly violent film about rival teenage gangs trapped in a world they never made. And, of course, an early scene evoking Chekhov’s ever-portentous firearm foreshadows emo bloodshed to come.

Riot Girls doesn’t disappoint in the mayhem department, and as a meta-story about female empowerment in an increasingly threatening “men's world,” this wild and woolly take on teen-angsters past would make Furiosa herself cheer. Not everything clicks, in particular some wooden dialogue, but Vuckovic’s fable has no shortage of classic Eighties needle-drops and plenty of love for misfits everywhere, no matter their sexual identity or prowess with crossbows. Grrrl power indeed.