Linda Ronstadt: The Sound of My Voice

”When Will I Be Loved?” belts Linda Ronstadt, the singer whose remarkable, decades-long career is recounted in this movie. The answer to that musical query lies here in this loving and valorizing survey of the life of this extraordinary song stylist. Love is ladled out in heaping spoonfuls through well-crafted montages and testimonies from fellow artists. The content is enjoyable and informative, a loving tribute even if deeper analysis and insight rarely rear their heads. Yet I dare anyone not to snap to attention and spontaneously follow the sound of that voice.

There are so many aspects of Ronstadt’s music career to delve into: the clarion voice that burst through our transistor radios in the fall of 1967 on the song “Different Drum” (that voice and that song with its transposed gender references made an indelible, lifetime impact on this reviewer when it was first heard on her bedroom radio at the age of 15); the solo and backup singer on countless folk rock, pop, and arena rock anthems; a Broadway soprano in The Pirates of Penzance; the singer of Mexican canciones on records that had the most American sales of any Spanish-language music; and a collaborator and harmonist with such other independent female artists as Dolly Parton, Emmylou Harris, Bonnie Raitt, and others. This documentary touches on them all, while various speakers sing her praises. Ronstadt also fills in parts of her story in a voiceover that offhandedly mentions the Parkinson’s disease that ended her singing career a decade ago. Yet only in a sweet, perfectly captured moment in her living room – a moment that provides the film’s ending – does the illness come into play, leaving the irony to the audience to tease out about the voice that studio executives could never harness being felled by the foibles of her own body.

Filmmakers Friedman and Epstein prove surprisingly lax in terms of seeing Ronstadt’s career through a cultural lens. Since they are a top-notch documentary duo with such probing films as The Celluloid Closet and The Times of Harvey Milk representative of their filmography, it’s fair to have expected more from this music doc. References are made to Ronstadt’s massive insecurities as well as her bold and self-directed accomplishments, but the things that tether these seemingly contradictory poles are left unexplored or only briefly touched upon. There’s a rich undertow to be sorted through about a woman’s ambitions in the male-dominated world of the music business, a woman who had many romances that provided fodder for gossip columns yet never married and adopted children on her own, and how a song stylist who can claim a tune and make it her own is a musical artist in her own right. Only in a couple of instances do the filmmakers include temporal references onscreen, leaving the rest of Ronstadt’s timeline in a bit of confusion, especially when employing signature songs in time periods prior to their recording. The benefit, however, is that we are treated to a voluminous amount of Ronstadt’s singing and a revealing look at her early family life. “Don’t get me wrong, it’s not that I knock it,” but Linda Ronstadt: The Sound of My Voice could stand a remix. 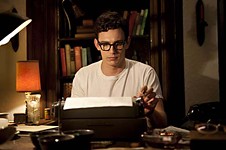 Howl
Howl is a must-see for Beat freaks and poetry geeks but might not be an enriching experience for newcomers to the work of Allen Ginsberg.