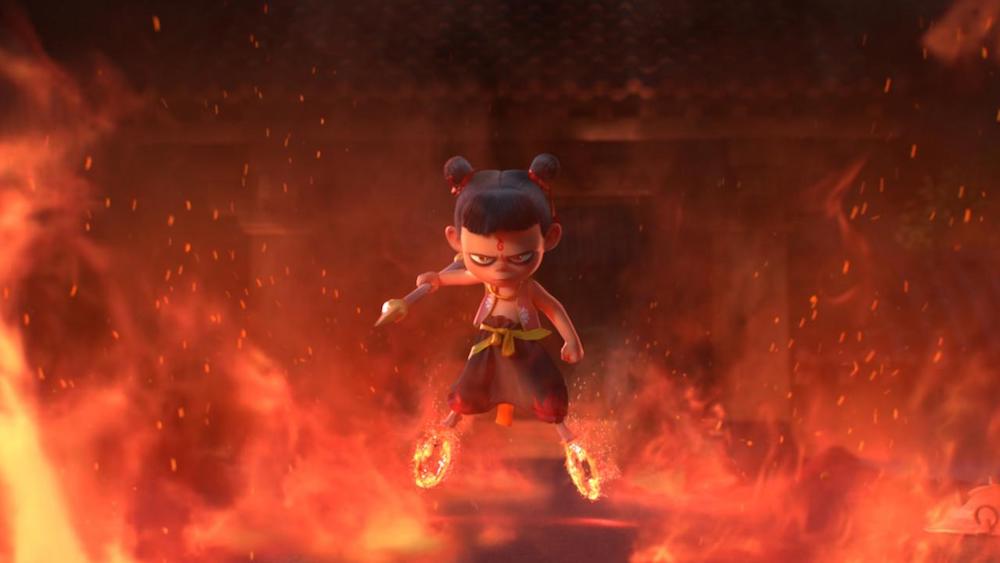 Becoming a new parent can be tough. Adopting a newborn can be even tougher. Being charged with raising a living incarnation of evil who happens to be an adorable, if fairly destructive, little scamp: Well, that's the burden of governor Li jing (Hao) and Madam Yin (Qi), who have been charged by the Primeval Lord of Heaven with raising Nezha (Yanting), the magical spawn of a heavenly pearl. Unfortunately, he's only half of what he's supposed to be: He's the wicked part of the legacy, and the Dragon King (Mo) has the other half, and with it the power to shake the order of the cosmos. Unfortunately for the world, its only hope is Nezha, and he's quite the hellion, oblivious to both his role in this scheme and unaware that, unless he can find his path to heroism in three years, he will be struck down by divine lightning.

Chinese animated feature Ne Zha is based extremely loosely on the ancient legend of Nezha, a mystical defender born during the Shang dynasty. However, it's about as accurate to the old tales as Disney's Hercules was to the original Greek myths. At heart, it's really a very standard tale of a flawed young rebel growing into the hero he is born to be. It's a magical epic with the requisite broad comedy flourishes, many of them provided by Jiaming as Taiyi Zhenren. He's the bumbling immortal who set this flawed version of events in motion by foolishly ignoring the machinations of his brother, Shen Gongbao (Wei), and counterbalances the Tasmanian Devil verve of young Nezha as he grapples with his powers and his irresponsible nature. Plus, whatever happened to the other half of that magical pearl?

Conventionally animated but paced with kinetic glee, Ne Zha crams in a plethora of contemporary and pop culture references (the opening sequence throws in an ahistorical gag about fingerprint log-in and a straight-up Terminator riff), and in those moments it's at its least fun and most obvious. It's also a little overindulgently long, and can seemingly never resist cramming in more character, like a pair of comedic jade temple guardians and a cadre of rebellious teenage villagers who scheme of a series of Rube Goldberg-esque traps to stop Nezha from tearing up the city one more time.

All those elements are a blast, but distract from where Ne Zha is most fun and most endearing, with the demon-child's loyal parents trying to work out how to keep him from darkness and eventual electrocution, leading to some sweet child-friendly message about fate and friendship. Plus Taiyi and his flying pig are just plain adorable.