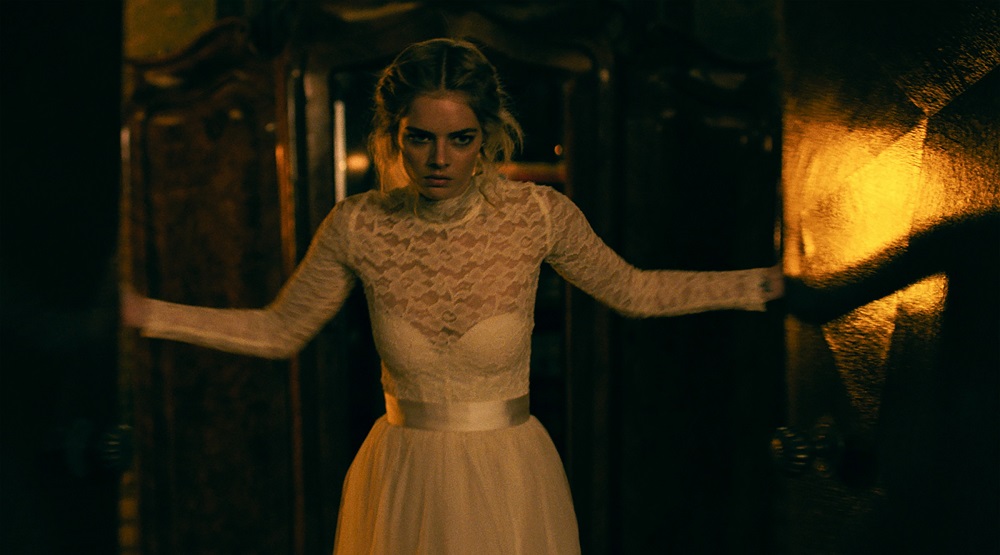 When it comes to games, you can read the rules all you want, or have them explained to you; but you never really get how it works until you're playing. So, for example, if newly wed bride Grace (Weaving) had been told by her husband, Alex (O'Brien), scion of the Le Domas family of board game moguls, that her new in-laws were going to hunt her down with guns, knives, axes, spear guns, and crossbows as part of an initiation ceremony that goes back three generations, then clearly she wouldn't believe him, right? Well, it's amazing what a few near-misses from bloodthirsty one-percenters will do to expand your mind.

Part Clue, part You're Next, and part Gormenghast, raucous black comedy Ready or Not is the welcome return of the filmmaking trio known as Radio Silence. The collective (consisting of directors Matt Bettinelli-Olpin and Tyler Gillett, and producer Chad Villella) turned the success of their festival-favorite shorts into anthology success in the first V/H/S film and the supernatural road-trip collection Southbound, but all that potential seemed derailed by the underwhelming Devil's Due in 2014. Ever since then it's been, well, radio silence from them, but Ready or Not is the film everyone had hoped for: scathing, bloody, funny, and hugely entertaining. The script by Guy Busick (who similarly pitched ordinary schmoes against unlikely menace in IFC's Stan Against Evil) and Ryan Murphy (an expert in Gothic from stop-motion shorts like "The Mill at Calder's End") has the giddy energy and bloody sensibilities that this kind of manor house mayhem requires, especially as the blue blood family – clearly not used to getting their hands dirty – careens around their ancestral edifice, smashing priceless items and issuing scathing bons mots.

The family is where the comedy and menace lies, and while it's easy to pay deserved praise to Henry Czerny as the bombastic patriarch Tony, or Andie MacDowell as she breaks out all her Southern goshdarnit charm as Becky, Grace's new mother-in-law and the other outsider in the room, it's a top-to-bottom wonderful ensemble. Adam Brody brings a silver-hearted cynicism to Daniel, the big brother who drinks his way through the family's sins; Nicky Guadagni's silver-haired and mercury-tongued Aunt Helene is a scene-stealer much like Eileen Brennan in Clue (an undoubted north star for the whole film) or Cloris Leachman's inimitable Frau Blücher. Similarly, while Wynonna Earp lead Melanie Scrofano may have proved her comedic credentials as the permanently horny Mrs. McMurray in Canadian smash Letterkenny, she's pivotal and brilliant as Emilie, the little sister whose coke-addled jitters and inferiority complex first inject the essential hilarious bumbling into the family's nefarious plot.

But it's Weaving as the blood-splattered bride who steals away with the whole affair, like a small child making off with a big slab of wedding cake. As the best thing about McG's The Babysitter, and the secret comedic weapon in Joe Lynch's deliciously twisted Mayhem, she knows how to rock horror comedies. But in Ready or Not she gets to flex the character muscles that made her a mainstay of Australian TV drama. Grace is sympathetic, stressed, and out of her depth – and that's just in meeting her new family. When the carnage starts, and family members start dropping like flies (mostly due to their own ineptitude), Weaving balances panic and badassery in equal measures. A ripped wedding dress, bloodstained Chucks, and an elephant gun are this season's must-have ensemble, and Weaving just became your new favorite underdog action star. 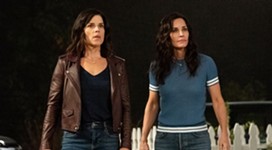 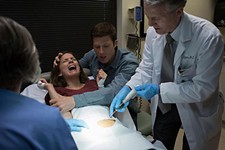 Devil's Due
She's having an unholy baby - but isn't that every pregnant woman's fear? The only new ingredient in this horror setup is the found-footage element.