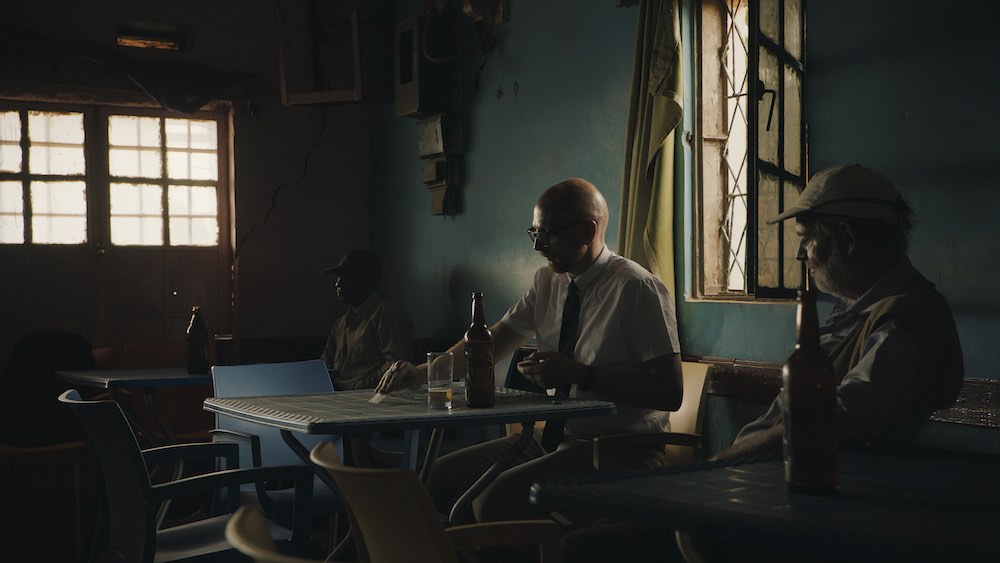 Professional provocateur/documentarian Mads Brügger’s latest is a jaw-dropping descent into a maelstrom of politically fraught history, conspiracy theories, and what may or may not be a genuinely sinister cabal of shadowy European and American spooks and mercenaries – among them the NSA and CIA, natch – who quite possibly committed a horrific, headline-grabbing act of murder in 1961. Those familiar with Brügger’s gonzo brand of investigative journalism from 2012’s The Ambassador (in which he posed as an attaché to infiltrate the thoroughly corrupt machinations and power plays within the Central African Republic) will find much to mull over in Cold Case as the director takes it upon himself to discover whether or not U.N. Secretary General Dag Hammarskjöld, who died under mysterious circumstances in a plane crash in the former Rhodesia (now Zambia), was in fact the target of assassination by clandestine groups working to stop several newly independent African nations from becoming too independent. There was then and remains now a wealth of gem and mineral rights at stake and those countries' former colonizers/overseers were none too happy to potentially lose such a lucrative source of blood money and postcolonial power. Hammarskjöld, an idealist, was outspoken in his belief that these newly minted African nations should benefit from self-determinism and thus reap the monetary benefits siphoned off by their respective colonial powers.

Brügger teams up with Swedish investigator Göran Björkdahl, and together they visit the crash site, interviewing aging Africans who witnessed the crash, several of whom agree that there was another plane, a fighter jet, that was seen tailing Hammarskjöld’s plane moments before it burst into flame midair and plummeted to the ground. They also uncover the existence of an enigmatic organization called the South African Institute for Maritime Research (SAIMR), a cloak-and-dagger paramilitary outfit run by an equally mysterious character named Keith Maxwell, who oversaw a number of medical clinics for poor, black South Africans. The subtext here appears to be that Maxwell’s “clinics” may actually have been a front for an apartheid-era sort of ethnic cleansing à la Josef Mengele. The more Brügger and Björkdahl struggle to dig up the truth (literally, in one scene that finds Brügger probing the crash site with a cheap metal detector and a pair of shovels), the more bizarre and malevolent aspects of an actual conspiracy begin to coalesce around them like a dark shroud of Cold War realpolitik that puts the crypto shenanigans of Alex Jones Infowars histrionics to shame.

As in his previous documentaries, Brügger’s actions and tone are shot through with pitch-black gallows humor and dizzying moments of absurdist farce, equal parts Hunter Thompson, Michael Moore, and the great, self-effacing British journalist Jon Ronson. You’re never quite sure exactly who to believe as the director and Björkdahl encounter multiple leads that turn out to be dead ends, interview members of the South African Truth and Reconciliation Commission – who insinuate that that group's leader was alleged to have initiated the spread of the AIDS virus in South Africa in the 1980s and 1990s – and eventually uncover damning evidence which suggests that Hammarskjöld's untimely death was clearly no accident and in fact merely one of many such efforts to destabilize the newly independent nations through targeted assassinations, COINTELPRO, and worse.

Six years in the making, Cold Case Hammarskjöld is by far Brügger’s most ambitious and engrossing documentary. A virtual whirlpool of covert, multi-government-sanctioned chicanery, corporate greed, and just good old-fashioned amorality by white Europeans desperate to hang on to power at any cost. As the saying goes, power corrupts, and absolute power corrupts absolutely. As Brügger admits early on, “This is either the world’s biggest murder mystery or the world’s most idiotic conspiracy theory.” Judging from the results of his reopening of Hammarskjöld’s cold case and the riveting documentary it produced, the former seems to be the awful, devastating truth.

For an interview with director Mads Brügger about digging up this conspiracy, read "An Assassination to Hide an Atrocity," May 31.