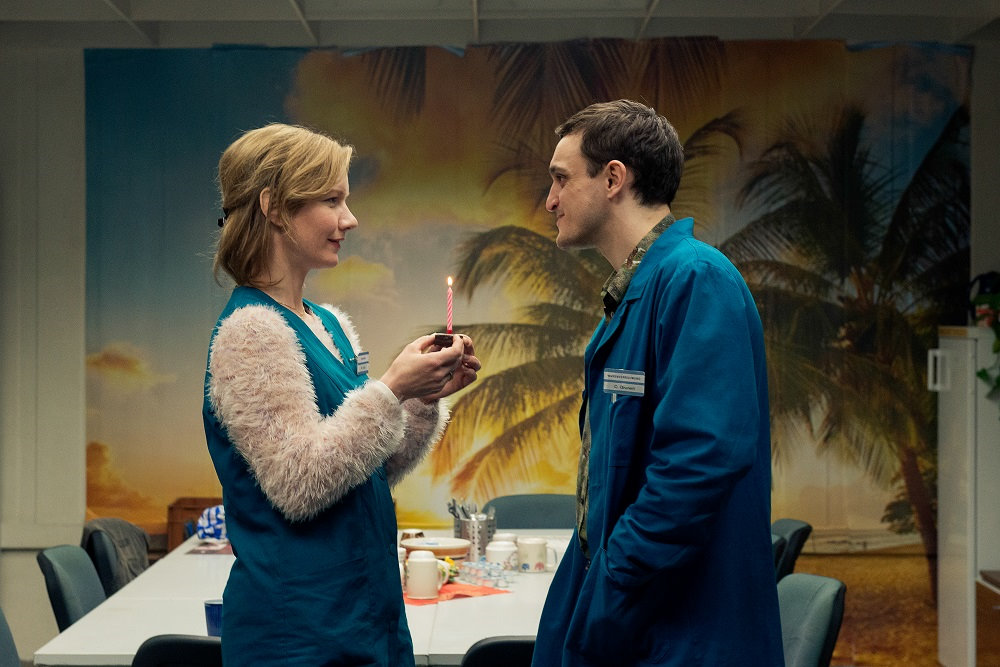 It’s only half over and already 2019 is looking like the year German actor Franz Rogowski breaks big in America, at least with the arthouse crowd. He carried Christian Petzold’s Casablanca-by-way-of-Kafka drama Transit – one of the year’s best – on his hunched shoulders this spring, and he carries over the same haunted quality to In the Aisles. Rogowski is slated to appear in December’s A Hidden Life, the latest from Terrence Malick; “a hidden life” could also apply to the taciturn, heavily-inked young man Rogowski plays in In the Aisles.

The film’s most touching – and telling – scene may be its very first. Rogowski’s Christian has just been hired to work the night shift stocking inventory at a big-box grocery. The supervisor hands him his new work smock, smooths his collar, places the tools of his new trade in Christian’s front pocket. This supervisor, an older man, never stops acting the boss, but there is something so paternal, even tender in the way he lays his hands on Christian. In the Aisles is being billed primarily as a romance, but its heart beats stronger as a watchful, empathetic study of the workplace and the intense intimacy that develops between co-workers, even as their home lives are so often a mystery.

One co-worker Christian would definitely like to get to know more is Marion (Toni Erdmann’s Sandra Hüller). She works in Sweets; he’s Beverages. When Christian first spies Marion confidently maneuvering a forklift, the sound design ghosts the tiniest of bird trills and the seductive lap of waves. He’s besotted. He’s also shy and uncertain, chin tucked to chest; the camera frequently trails him from behind or catches him at an angle, as if intuiting that Christian, who has a troubled past, is uncomfortable being seen.

Based on a short story by Clemens Meyer, In the Aisles has just the softest breath of a plot, but director Thomas Stuber paints a mesmerizing portrait of the grocery store’s weird night kingdom and the surrounding community looking the worse for wear, post-reunification. In the Aisles is a triumph of mood, aided by an eclectic soundtrack that skips from Delta blues to electro-pop to Strauss and Donizetti, and a worthy stage for Rogowski to continue introducing himself to an international audience.