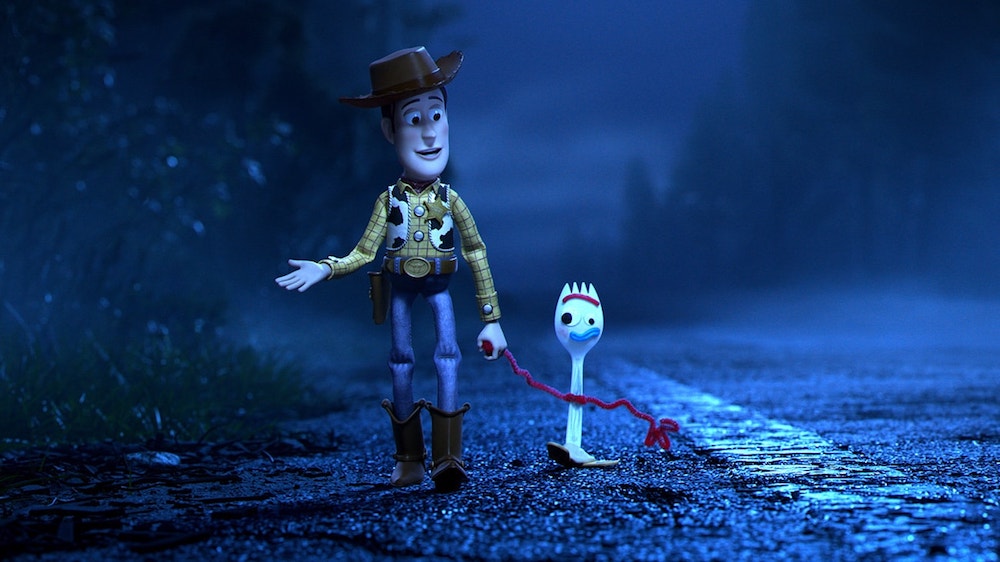 Leaving well enough alone has never been the Hollywood way, which is how we’ve arrived at Toy Story 4. It isn’t terrible news. Pixar’s foundational franchise is always a good time. It’s only that 2010’s Toy Story 3 – an Academy Award winner that had the chutzpah to force its toy heroes to quite literally stare down death, and by extension nudge tot viewers into contemplating their own mortality – so exquisitely marked an end punctuation to the series. This latest sequel proffers nothing so transcendent.

A good time, nevertheless, and spent in good company: The roll call includes series stalwarts sheriff Woody (Hanks) and spaceman Buzz Lightyear (Allen), plus Woody’s old sweetheart Bo Peep (Potts, crackling), whose adventures away from Andy’s toy chest inform her evolved characterization as a free-agent toy equal parts saucy and swashbuckling. New recruits Tony Hale, Keegan-Michael Key, Jordan Peele, Keanu Reeves, and Christina Hendricks chime in with uniformly outstanding voice work, but I won’t spoil any of their parts. (Just stick around to the very end of the credits for one of their gags; it’s worth it.)

The plot beats a familiar path, with the toys once again separated from their child; there are so many circle-backs to rescue lost friends, the story’s forward thrust turns a little dithering. What’s fresh here is where they land – an antiques shop, the perfect place for the series to continue what must surely be a point of pride: Its light mining of horror tropes. (Baby’s first jump scare! Also: Ventriloquist dummies really are just the spookiest.) And what a technical stunner. My emotional investment in the story was pretty much zilch, but I marveled over the depth of field, the nuance of expression, the way shadows and light played on these plasticine faces. Twenty-four years ago, the original Toy Story broke ground as the first-ever entirely computer animated feature film. What’s more astonishing now is how all those ones and zeroes are harnessed to produce something so utterly lifelike.