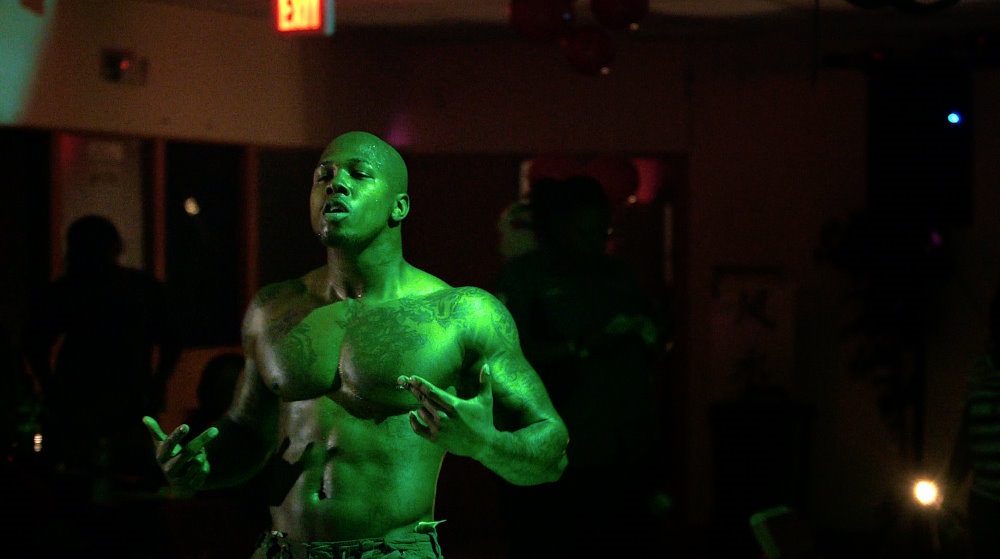 This One's for the Ladies

In contrast to the Magic Mike pictures’ spanglier vision of male stripping, this SXSW 2018 award-winning documentary is realistic about where the action is more apt to take place: in basements with low ceilings and folding chairs. There’s no stage. The dancers in Newark’s all-Black Nasty Boyz revue mingle freely with the bachelorettes and birthday girls who flock to their shows and shower them in dollar bills. Director Gene Graham enjoys similarly close access to the men at work – the many penises on display (mostly socked and bouncing, a few proudly unfurled) netted the film an NC-17 rating – but we don’t hear much from the dancers about their craft, the work they put into building characters and their impressively chiseled bodies.

Instead, we come to know a little about a lot of people, a whole community sprung up around the dance crew co-founded by twin brothers Raw Dawg and Tygar (in real life Obar and Omar McGill, who are also credited as associate producers). That community includes the twins’ parents and children, two fans who turn into food vendors, the enthusiastically raunchy female MC Sweet Tee, and the crew’s sole woman, Blaze, a lesbian dom embraced by the largely straight woman audience. The interviewees all speak candidly about their community; there are moving accounts of police violence, the cycle of poverty and addiction, and how stripping became a way to supplement (or supplant) minimum wage jobs and a lawful, lucrative alternative to dealing drugs.

But the film suffers from the lack of an organizational device or a surer instinct for what are the more interesting stories here. I regretted the minutes spent on one dancer’s Superman fixation when another dancer’s depression – and the rare feeling of control he experiences when performing – is discussed only fleetingly, and the film entirely skips a closer examination of the more subversive elements of the twins’ act, which includes a close-mouthed long kiss between brothers (all the more intriguing considering one of the brothers initially balked at stripping for being too “homo”). Graham’s film teems with fascinating characters – ultimately, too many for the abbreviated running time.

This One's for the Ladies, Gene Graham