Sean's not having a good time of things. On a break from his job as a TV weatherman for an on-air meltdown and dumped by his boyfriend, after six months he's finally clearing out the last trace of his ex from their house: a huge potted tree on their deck with a view over L.A.'s San Rafael Hills. "That's my ex for you," he mutters when he realizes that the absentee had painted around, not under, the planter. So he does what any manually unskilled TV weatherman with hipsterish tendencies would do: He goes to hire a day laborer to paint his deck. That's when he meets Ernesto (Patiño), a podgy fiftysomething grandpa who barely speaks a word of English – so Sean clumsily tries to set him at ease by saying it's OK, he barely speaks any Spanish.

An unlikely American debut for Irish writer/director John Butler, Papi Chulo hides its meaning in its punny title. It sometimes translates as pimp daddy – and there's an implication that turns into an outright statement that Ernesto is Sean's type, a bulky older Latino man who's completely unavailable. But in Southern California it's a term of endearment, and that's not something that Sean – friendless, boyfriendless, emotionally detached – has in his life, so he convinces Ernesto to do everything other than paint the deck. Hiking, rowing, go to parties, anything to distract Sean from his loneliness.

What could become an awkward comedy of manners, or even a glib coming-out story, instead takes a surprising left turn as Sean tries to find some way to connect with this friendly but seemingly bewildered guy. Only seemingly because, although their conversations are a sloppy mess of Spanglish and gestures, Ernesto's inner life is filled out through occasional phone calls with his wife, Linda (Campbell-Martinez). But what Butler's story is really about is what we look for in each other and in connections. Bomer (White Collar, The Normal Heart) keeps Sean just the right side of histrionic, instead letting his increasing emotional panic speak for itself. Meanwhile, Patiño quietly anchors the story as he indulges Sean's playdates.

Butler's quiet, slow-moving comedy drama touches on so many aspects of contemporary L.A. life – hipsters, gentrification, stereotyping, race relations – that it sometimes lands only glancing blows on those topics (Sean's obliviousness to Ernesto's own needs say more about that power dynamic than anything the passive partner here gets to do or say). Ultimately, its most poignant details come from depicting a nonsexual friendship between a straight guy and a gay guy. Without quite reaching the lyrical excellence of another recent exploration of male bonds, the exquisite The Last Black Man in San Francisco, it wears its fluttering heart on its sleeve well. 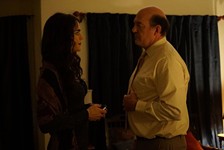 Anything
True love overcomes convention in this stylish, earnest romance.