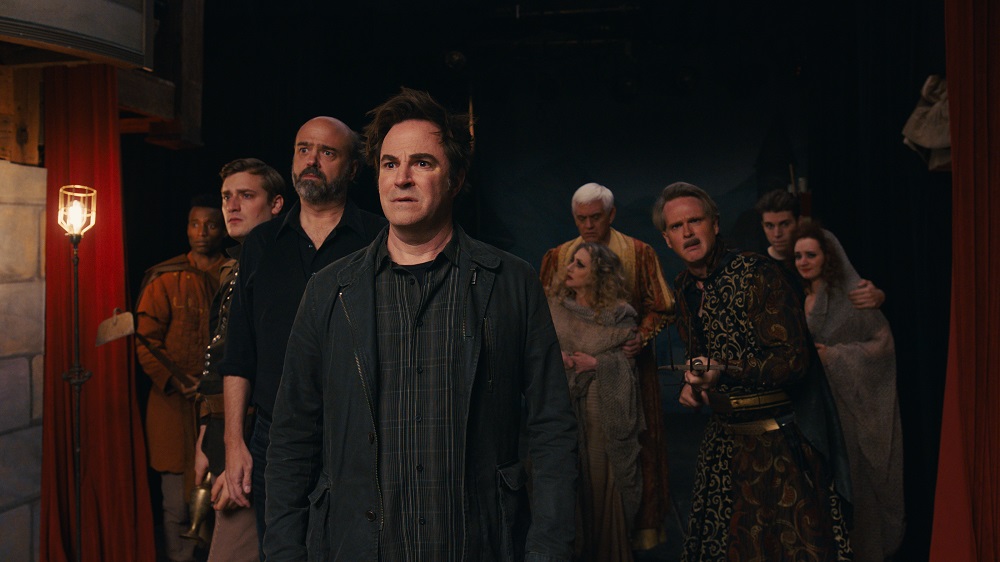 As Batman once said, criminals are a cowardly, superstitious lot. In theatrical supernatural comedy Ghost Light, that dramatic truism has equal merit as a description for thespians. "Great acting demands surrender to the imaginary," explains long-suffering theater director Henry Asquith (Bart), trying to talk one of his highly-strung performers off the proverbial ledge. After all, he's trying to wrangle his performers through a summer provincial production of Macbeth and, as everyone knows, the Scottish play comes with a certain amount of magical baggage and a myth of being a cursed text. This is on top of all the other theatrical superstitions (like never turning off the eponymous back stage ghost light), and the greatest curse of actors: That they're perpetually banging each other.

In this case, it's Asquith's Lady Macbeth, Liz Beth Stevens (Sossamon, riddled with panic and jealousy), who's married to the pompous, hammy and slightly daffy Alex (Elwes, drifting through the part with a perverted charm). She's tired of him, but not of understudy Thomas (Riley). He's sick of being Banquo, she's sick of Alex's constant anecdotes about getting the callback for Top Gun, and they have plans to replace Alex both as Macbeth and in Liz's bed. Except the supernatural forces invoked by their schemes and by backstage infractions have a different fate lined up. That a mysterious backpacker (Campbell) arrives at just the moment that they need a third witch is the smallest of portents that there may be more foul than fair in the night ahead.

Plays within plays are a standard of theater, especially since they give writers a good opportunity to poke a little loving fun at stage folk. This screwball-tinged supernatural comedy is loaded with quips about having one line and being done for the evening, who gets the best costumes, and the enforced but surprisingly deep camaraderie of backstage life. At the same time, writer/director John Hopkins balances his large ensemble cast with some excellently executed minor special effects, to bounce this low-budget indie comedy into higher billing than one would expect. The result is a delicious breeziness that's offset by just enough uncanny malice as the actors become replaced by their characters.

There is, of course, a modicum of blood, given more impact by a peculiar charm (in no small part provided by Kane and Tom as the veteran actors of the troupe who are rightfully the most respectful of the old backstage legends). Yet what makes Ghost Light a true pleasure is that it's a lovely homage to the kind of hybrid supernatural rom-coms that they don't make any more, in the tradition of Blithe Spirit and Topper. What's done is done, and executed with an endearing wittiness.

Wanna Hang Out While We Watch Miss Congeniality?
Don't be fashionably late for this week's live tweet!