Is Bob Dylan influential? Undeniably. Is Bob Dylan charismatic? Effortlessly? Is Bob Dylan likable or trustworthy? That's a much more complicated question, and one that seemingly lurks in the background of every frame of Martin Scorsese's second full documentary on the singer/songwriter, after his rambling 2005 analysis of Dylan's early life and success, No Direction Home.

That first film ended when Dylan's first touring career did: In 1966, after a motorcycle crash. When he came back in 1974 for a 40-date stadium run with the Band, Scorsese was on hand to capture the final show as seminal concert movie The Last Waltz. This time he jumps to 1975-6 for the quasi-legendary Rolling Thunder Revue, Dylan's idea to take an old-timey roadshow across America, loaded with talented musicians who would all get their moment in the spotlight but as part of the ensemble. It began as one night of improv at Gerde's Folk City, and became a 57-date all-star revue, with a coterie of stars from Joni Mitchell to Mick Ronson on stage. And, of course, Dylan. Omnipresent yet enigmatic, charming but distants, earnest and manipulative, caught here in both contemporary footage and recent interviews.

There's an underlying feeling that the closer you get to Dylan, the less likable he is. It's odd and sometimes uncomfortable to see Sharon Stone recount how, as a 19-year-old, she ended up on the bandwagon, touring across the U.S., an enthusiastic acolyte. At the other end of the spectrum is Joan Baez, who witheringly comments that five minutes with Dylan and all is forgiven (with an unstated subtext that there's a lot to forgive). Yet Scorsese, an unapologetic fan, never wants to pull too hard at those thread, which can leave the film a little unfulfilling.

Maybe it's the length that's an issue. No Direction Home clocks in at a heroic three and a half hours, and yet even at an unhurried two hours plus Rolling Thunder is somewhere between too long and too short. Scorsese seems to take an odd pleasure in diversions and loops that are both important and inessential, like a third act meander into Dylan's advocacy for falsely imprisoned boxer Ruben "The Hurricane" Carter.

And the bigger question: is any of this true? Half the characters interviewed aren't real (there is no Stefan van Dorp, the filmmaker who supposedly shot the original tour footage, and no one is sure about that Sharon Stone story). No one can even agree where the name of the tour came from. Rolling Thunder Revue seems to really be Dylan and Scorsese taking another run at Renaldo & Clara, the unloved documentary-narrative-concert film proposed by late filmmaker Howard Alk (the real van Dorp, if such a thing exists) and playwright Sam Shepard, which was finally released by Dylan as a vanity piece in 1978. It's the same structure, it's the same tour, and if that's what they have really done, it's more disappointing than just telling the story of the Rolling Thunder Revue. There's already so much drama there - of how Dylan got back on the road and has stayed there ever since, of how it lost its artistic vision and became just another concert, of how friends like iconic poet Alan Ginsberg lost their place on stage and became nothing more than valets and bag handlers.

Instead, Scorsese and Dylan (it's hard not to see them as in giggling cahoots) try to outwit the audience, playing the same true/false games that Orson Welles did with the far tricksier Fake For Fake. The difference was that Welles told everyone that they were at the magic show, and the illusions had a sense of wonder. Rolling Thunder Revue, even with Dylan's oblique comments about lies and masks, is more like a long con, one that obfuscates rather than intrigues.

Where Rolling Thunder Revue works best is when it's clear in its ambiguity. Myths are blurry, musical myths doubly so, and so facts are inevitably in short supply when it comes to a movie reminiscing about a tour 45 years ago where everyone was bombed and exhausted all the time. Add in some gorgeously restored performance footage (no Netflix Original has so demanded a big screen since the twin-carb brutality of heist flick Wheelman), and even Dylan agnostics will start to believe a little. As for the multitudes of faithful: come gather 'round people and don't believe a damn word you're told. 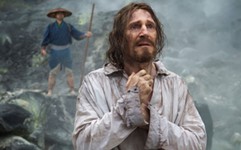