John Lithgow and Blythe Danner, who play a couple of seniors falling in love, are The Tomorrow Man’s main attraction. The film is largely a two-hander, and these seasoned pros own the movie screen and make us care about their characters and their burgeoning relationship. This is even a greater accomplishment considering the fact that the characters they play are scantily developed in this movie that’s written, shot, and directed by Noble Jones, an experienced music video director making his entry as a feature film director.

Ed Hemsler (Lithgow) is a divorced and retired man, who lives a solitary life, rattling around his empty house. Curiously, when he listens to the nightly news, the anchor always concludes with some words and admonitions spoken directly to Ed. He drives an old Ford truck, which he uses to make frequent visits to the local grocery store in the unspecified small town in which he lives. He picks up small quantities of supplies and regularly adds them to the neatly stocked shelfs in his backyard bomb shelter. Ed is a doomsday prepper who logs in as Captain Reality to his chat group, where he shares his conspiracy theories with other like-minded souls. The film’s opening scene pictures him at home on the telephone delivering a preparedness harangue to his son, who we can tell has heard it all before and is barely half-listening.

It’s in the grocery store that Ed first spies Ronnie Meisner (Danner), an unconventionally attractive woman around his age. (Ed describes himself as being “on the wrong side of 60.”) Ronnie, too, buys just a few items, and moreover, pays for them with cash, which Ed takes as a sign that she is a doomsday prepper as well. Ed stages a clumsy meet-cute in the parking lot, and from there, it’s off to the races. Soon there’s a predictably calamitous Thanksgiving dinner at the family home of Ed’s son (Cecil). Ed eventually shows Ronnie his bomb shelter and Ronnie invites him into her home, and it becomes immediately evident why she has heretofore kept the premises private. All this is followed by a health scare, which can always be reliably called upon in movies to resolve emotional crises. A surprising and almost amusing concluding scene saves The Tomorrow Man from almost complete predictability.

Noble Jones’ screenplay, unfortunately, shortchanges these characters, who despite interesting setups display many inconsistencies as characters. Perfunctory background information provides some context but little depth to our understanding of Ed and Ronnie’s “quirks.” At times, The Tomorrow Man may call to mind the doomsday scenario of Take Shelter mixed with a buoyant senior love story such as Danner’s recent I’ll See You in My Dreams. Yet The Tomorrow Man is totally dependent on Lithgow and Danner to imbue the characters with warmth and humanity, and elevate them to figures worthy of our interest. Good supporting work from the other actors also keeps us attuned to the story. But otherwise, The Tomorrow Man gives off a feeling of having seen it all before. 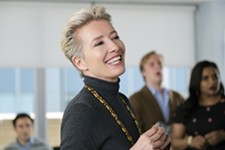