Godzilla: King of the Monsters

Officially the longest-running film franchise in history, Toho Studios’ gargantuan, Atomic Age metaphor-on-steroids has become a global pop culture staple. Thirty-four movies, Saturday morning cartoons, sugary breakfast cereals, memorably comic cameos in One Crazy Summer and Pee-wee’s Big Adventure, and even a late-Seventies stint as a member of the Marvel Comics Universe have ensured the big galoot a permanent place in the pantheon of sine qua non monsterdom. As they say, it’s Godzilla’s world, we just live in it.

Godzilla: King of the Monsters is the third entry into Legendary Pictures’ MonsterVerse brand – following 2014's Godzilla and 2017's Kong: Skull Island – and while lifelong fans of ‘Zilla will be rightfully impressed by the epic kaiju smackdowns on CGI display here, much of the film’s fun is overrun by a combination of overlong exposition, ham-fisted dialogue, and some genuinely confusing editing. You’re never quite sure at any given point where, exactly, the human characters are, what exactly they’re doing, or what the fuck that sudden, off-putting plot twist that just happened means. That actually makes this one of the more faithful homages to Toho’s “Heisei era” Godzilla movies, particularly Godzilla vs. Destoroyah and Godzilla vs. Biollante, which – while enormously entertaining – still suffered from the same sense of perplexing plotting.

Recounting the tortuous mash-up of the film’s human characters doing inane things ineptly that serves as the movie's plot is almost beside the point, but here goes. In the cataclysmic aftermath of the clash between Godzilla and the MUTOs (Massive Unidentified Terrestrial Organisms) in director Gareth Edwards’ initial 2014 reboot, the secretive cryptozoological Monarch organization under heroic scientist and occasional Zen poet Dr. Ishiro Serizawa (Watanabe) has located and locked down more “Titans” across the globe. Monarch member Dr. Emma Russell (Farmiga) and her daughter Madison (Stranger Things' Brown) are estranged from dad Mark (Chandler) after the death of their son in the previous film. Dr. Russell has developed ORCA, a method of communicating with the Titans (the pupal Mothra, initially) but is interrupted by the arrival of nihilist-cum-ecoterrorist and Snidely Whiplash tribute act Jonah Alan (Dance) who plans to awaken all of the Titans to “restore balance to the Earth.” Meanwhile, the military plans to harness the Titans for, y’know, warfare purposes, but are readying the monster-slaying oxygen destroyer (first deployed in the 1954 original, Gojira). As the Titans are unleashed and head by air, land, and sea to new alpha-God King Ghidorah, humanity scrambles and chaos reigns while Madison embarks on her own mission, sans Mom and Dad. It’s a mess of a storyline. Characters with only the vaguest of backstories come and go and yell and die noble deaths.

But let’s be honest: Unless you’re a grad student writing your thesis on the geopolitical and environmental thematics spread throughout Godzilla’s extensive oeuvre, you’re here to see giant monsters knock the stuffing out of each other while laying waste to mankind’s manifold metropolises. In this regard, Godzilla: King of the Monsters does not disappoint. Director Dougherty (Krampus, Trick ‘r Treat) corrals a menagerie of series regulars: the Pteranodon-esque, volcano-born Rodan; psychedelically luminous Mothra as the Big Green Guy’s natural ally; and perpetual nemesis King Ghidorah, a triple-headed, lightning-spitting dragon with a wingspan of what looks to be a quarter-mile or more. There’s also brief appearances from the MUTOs, a mutated woolly mammoth-thing, and what looks suspiciously like creepy-crawly, 1960s-era arachnid Kumonga. All-out kaiju brawls ensue, and they are unsurprisingly awesome and the real reason to catch this movie on an IMAX if you can.

Bear McCreary’s bombastic score occasionally riffs on composer Akira Ifukube’s haunting, martial music from the classic Godzilla films of the 1950s and 1960s, but it, like the entirety of Godzilla: King of the Monsters feels overburdened and unsure of itself. Here’s hoping Legendary’s 2020 release of Godzilla vs. King Kong will improve on – or at least approach – the formula Ishirō Honda and Toho Studios mastered over half a century ago. 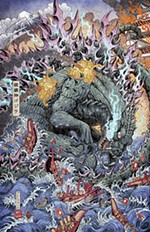 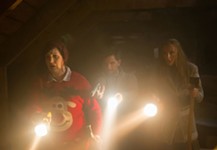 Krampus
This horror-comedy brings a demon to the holiday gathering