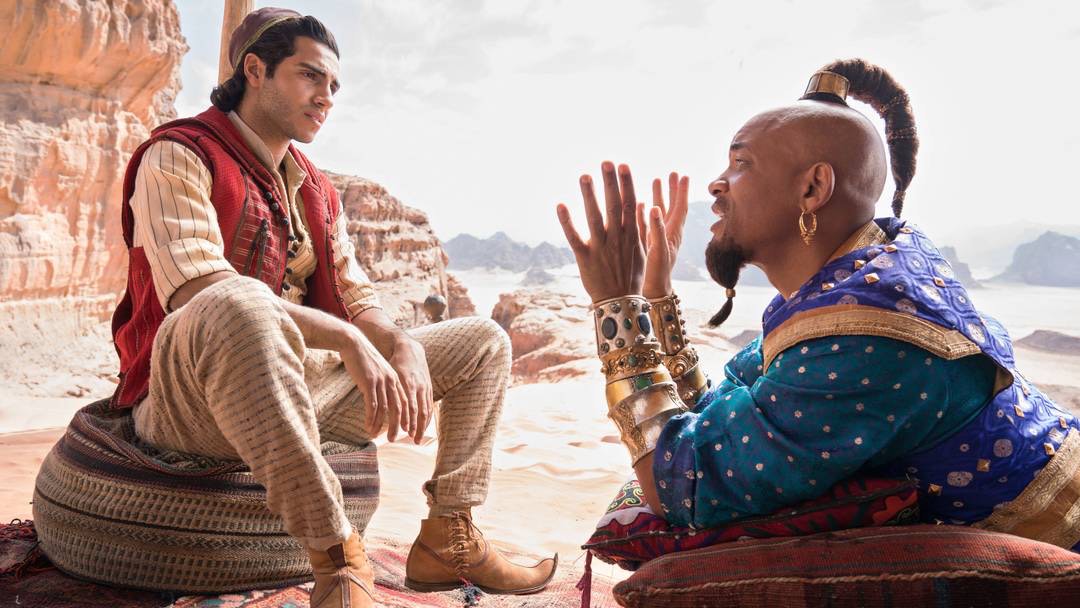 It won’t be long before every animated Disney movie from the past three decades has a live-action adaptation. Before Aladdin, there was The Jungle Book and Beauty and the Beast. After Aladdin, there will be The Lion King and Lady and the Tramp. For now, though, the studio continues to work with their best original material; one shudders to think what will happen when they’re forced to give something like Oliver & Company a live-action skin.

In this remake of the 1992 cartoon, Aladdin (Massoud) lives on the streets of Agrabah, stealing enough trinkets and food from the merchants to keep his belly warm at night. Meanwhile, Princess Jasmine (Scott) is a prisoner of tragedy; after the murder of her mother, the Queen, Jasmine has been hidden behind the palace walls and ostensibly forbidden from venturing out. When the two cross paths on the streets, there’s an instant spark, but soon Aladdin finds himself an unwitting pawn in ambitious Grand Vizier Jafar’s (Kenzari) plot to overtake the kingdom. One chance encounter with a Genie (Smith) later, Aladdin  – now Prince Ali  –  heads back to Agrabah with a wish-fueled plan to impress the girl.

Much was made of the casting process, but in Massoud and Scott, the filmmakers have found their Disney prince and princess. Both actors are effortlessly charming, developing updated versions of Aladdin and Jasmine that retain what we loved about these characters but empower them for modern audiences. They’re so good that we often ignore the strange things going on around them. Ritchie’s choices to tinker with the frame rate and show as much of the digital landscape as possible often hold the most significant sequences back, forcing the two actors to move and sing through an environment that undermines the songs on every level. Musical numbers in cinema have always been a form of honesty, but there’s nothing honest about the digital world these actors inhabit.

And then there’s the Genie. Much of what doesn’t work about the character  –  outside of the moments where Smith ditches his sing-speak for some truly underwhelming vocal work  –  are also tied to the special effects. Watching the Genie’s features swim ever-so-slightly across his face is endlessly distracting; it’s a kindness whenever Aladdin lets Smith appear onscreen without the addition of special effects. But this is also the only actor whose celebrity itself could form the foundation for the character. As much as the original Genie was an extension of Robin Williams' onstage persona, so does Smith’s Genie springboard off two decades of action-comedies. It may not always work, but nobody else could even come close.

There’s a 20-minute stretch at the heart of the film where Aladdin ditches the special effects and leans into the comedy, letting Smith, Massoud, and Scott be their relentlessly charming movie star selves. This stretch ends with a Punjabi-influenced dance number, and for a moment, you can’t help but think that countless multiplex viewers are about to see this type of music and movement represented onscreen for the first time. Then Aladdin descends once more into a mess of spectacle, and it’s hard not to wonder what these actors could do with something a bit more original.