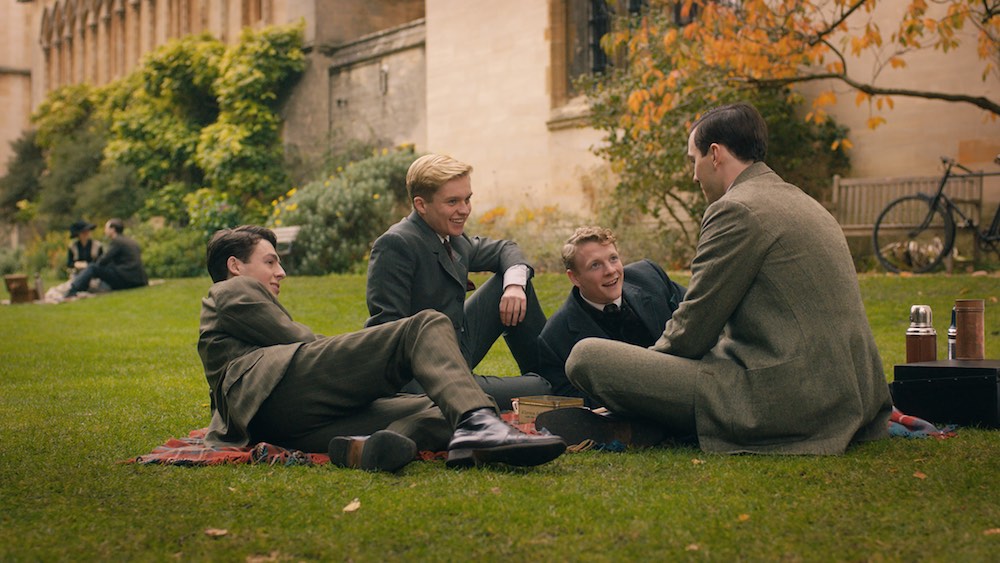 Life experiences shape the creative process, which is the main theme of Dome Karukoski’s biopic charting the formative years of John Ronald Reuel Tolkien, aka J.R.R. Tolkien, who would write one of the most beloved and popular high fantasy series ever written. The Finnish director (Tom of Finland), along with screenwriters David Gleeson and Stephen Beresford, intercuts between Tolkien’s youth and education and his harrowing experience as a soldier in World War I, especially the brutal Somme Offensive, one of the bloodiest battles in human history, as British and French forces sought to stave off Germany on the Western Front. It is a well-worn device to contrast the idyllic with the horrific, and for the most part it succeeds, but it also falls into a kind of pedantic flow of checkmarks ticked off inherent to the genre.

The young Tolkien (played by Gilby) explores meadows and forests with his younger brother, while his mother Mabel (Donnelly) regales them with candlelit tales of mythical dragons and fosters the boys’ interest in literature. Those scenes of the countryside are dutifully sun-dappled by cinematographer Lasse Frank Johannessen: But as financial strains stress the family, Tolkien (now Hoult) is moved to smoke-covered industrial Birmingham, then orphaned and placed under the care of a benefactor, Mrs. Faulkner (Ferris), through the help of a Catholic priest, Father Morgan (Meaney). He continues his education, first at King Edward’s School, and later at Oxford College. He makes friends with a group of young men, erudite intellectuals all, and together they form the TCBS (Tea Club and Barrovian Society, named after the teahouse within the Barrows department store that they frequented). These scenes have a familiar but comforting cadence, of young men joking and bantering about life and literature. All the while Tolkien is knee-deep in studying ancient mythology when he’s not sketching helmets and monsters, obsessively affixed to his bedroom wall. He becomes obsessed with language and poetry. He also meets his muse and love, Edith (Collins), who adds emotion to his intellectual pursuits: “Words aren’t beautiful for how they sound, they’re beautiful for what they mean,” she remarks, and a chance encounter with a philology professor (Jacobi) steers Tolkien down the road of that discipline – until global conflict intervenes and he enlists, with his friends, as a soldier in the the Great War.

Tolkien the film is incredibly concerned with the connect-the-dots moments from the author’s life that informed his work, almost to a fault. Here there is the pastoral landscape that informs the Shire and there is the camaraderie of young men forming a “fellowship.” When Tolkien, feverish from sickness on the battlefield, hallucinates a German flamethrower as a dragon, it becomes a bit overdetermined. Still, the performances are wonderful, especially Hoult and Collins, who exude a charming chemistry, and fans of both the books and the films will find pleasure in this look at the early life of the man whose work still influences artists to this day.