When it comes to guitars, Ray Wylie Hubbard sang it best: “Good tone is more important than the show or the biz/ Show business is a heartbreaking thing/ But if you got good tone you can get through the gig.” That sort of hard-won musical wisdom flows through this intimate portrait of Greenwich Village-based guitar maker Rick Kelly and his protégé Cindy Hulej, who daily apply concentrated and reverential craftsmanship to the creation of utterly unique instruments. Kelly’s impish smile and unassuming manner belie the blood, sweat, and tears he brings to his trade. He is, for want of a better word, a guitartisan, the Hattori Hanzō of six-string samurais, and his singular handiwork is revered by the steady stream of legendary musicians who wander into his cozily cluttered workshop.

Carmine Street Guitars being a documentary by Ron Mann (Tales of the Rat Fink, Grass), the border between cinema verité and scripted-seeming sections is a porous one. Yet there’s no denying that Kelly’s creations exude a peerless sort of sorcery that lures the best of the best into the shop to strum a song or two, admire Hulej’s intricate, wood-burned inlays and etchings, or just shoot the breeze. Chatting with Patti Smith's longtime guitarist Lenny Kaye on the subject of Fender Telecasters and musicianship in general, Kelly sagely notes that “Anything more than three chords is kinda like showing off.” Joe Strummer, Johnny Ramone, and Lou Reed would doubtless agree, but they’re not around anymore, in the flesh at least – although Reed’s guitar makes a cameo appearance. So in lieu of those late rockers, Mann trains his lens on the likes of the Roots' Kirk Douglas, who worshipfully comments on the audaciously simple power of the guitar: “One pickup, wood, electricity, boom!”

Roving behind the curtain that leads to his gloriously sawdusty workshop, Kelly explains how the timber he chooses helps to create the timbre (and the tone) of the final product. The secret? It’s all reclaimed lumber from old New York itself. Stacks of what to the untrained eye would appear to be junk wood are in fact salvaged pieces of Five Points-era lower Manhattan, each with a scrawled note attesting to their original address and date, their place in time: Bowery, 39 Carmine St/1850, Washington Mews/1830. Two-hundred-year-old wood that was used to literally build the city. "People’ve been spilling beer on this wood for over 160 years," says Kelly, running his hand over a fire-scarred plank of highly resonant white pine that was once the floor of the infamous McSorley’s Old Ale House.

Carmine Street Guitars is an affectionate, somewhat elegiac glimpse into a master and a craft that, like so much of the surrounding neighborhood, is steadily being corporately gentrified. When a real-estate suit-and-tie guy pops in to sniff around for presumably yet another precious property to gobble, Kelly’s tersely polite conversation barely conceals his obvious contempt. Thankfully, Charlie Sexton drops by to hang out, as does Bill Frisell, who strums the Beach Boys' masterpiece “Surfer Girl” on one of Kelly’s own masterworks. It’s a sweet little gem of a moment in a film that’s part time capsule, part thoughtful meditation on art and artisans, and all heart. 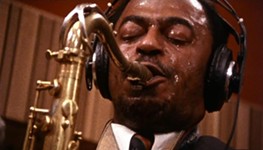