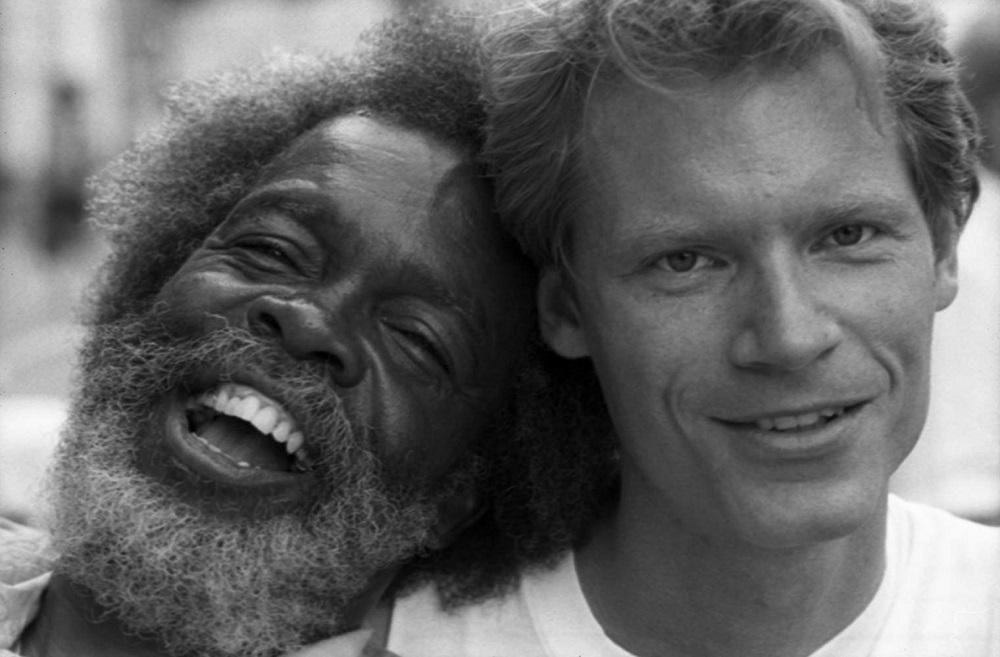 The alchemy of human connection defies predictable explanation. The transformation from stranger to friend may gradually spark and then steadfastly endure over time, or it can spontaneously flare with an explicable intensity only to crumble to ashes later. The melancholy documentary Satan & Adam fondly recounts the odd coupling of grizzled, African-American bluesman Sterling Magee (the self-proclaimed devil in the title) and the much younger, Ivy League-educated white boy Adam Gussow, who initially achieved minor celebrity together during the post-Reagan years as amateur musical collaborators entertaining pedestrians on the sidewalks of Harlem. The duo’s street cred soon ratcheted upward when the era’s seminal band U2 briefly featured the unlikely pair in its 1988 North American tour documentary, Rattle and Hum. From there, Magee and Gussow migrated from their noisy, makeshift, concrete stage to more professional venues, performing at jazz festivals, touring with the legendary Bo Diddley, recording a handful of albums, and cultivating a legitimate reputation in the process.

Back then, they were an extraordinary sight, particularly for those living above 115th Street: guitarist and percussionist Magee growling out songs while Gussow enthusiastically accompanied him on the harmonica. Their artistic and personal bond gently defied the racial tensions in New York City at the time, refuting the cultural and political zeitgeist of Spike Lee’s Do the Right Thing and Tom Wolfe’s The Bonfire of the Vanities. But just as quickly as a chance meeting near the Apollo Theatre brought these two very different men within each other’s orbits, equally unexpected developments abruptly concluded their relationship. That’s when Satan & Adam goes from an interesting story about a collaborative partnership reaching its end to something much deeper about the haunting imprint someone can make on your life.

Shifting from gritty, monochromatic, cinema verité footage shot around 30 years ago to more contemporary interviews (with the Edge and the Reverend Al Sharpton, among others) and other scenes filmed in color, the movie feels a little incomplete, a shortfall inherent in its 80-minute length. It’s unclear exactly when it took shape as a documentary, though the break in Magee and Gussow’s partnership is unquestionably the turning point in the narrative. What’s refreshing here is the filmmaker’s refusal to smugly color the human connection between these two men in Green Book bullshit. Shading that shady metaphor a step further, Satan & Adam eschews ebony-and-ivory banality to depict a friendship that refuses to be tinted in black and white.