The world is ending. That's always how it feels when someone dear to you dies. In Starfish, that may be more literally true: an enigmatic opening of voices on a static-muddled radio gives way to an image of a snow-covered landscape, from which unearthly ziggurats have erupted, as a fireball bursts over the horizon.

But that's not the immediate concern of Aubrey (Gardner), who is walking through life in a daze after her best and oldest friend, Grace (Masterson), has died. Unsure what else to do with herself, and with no particular destination, after the funeral she breaks into Grace's now-empty apartment, immersing herself in her grief, and unaware of the eldritch fate that awaits the world.

Drawing deep from his own personal experiences with grief and loss, first-time feature writer/director A.T. White (of British band Ghostlight), lets Aubrey wander through the erratic shared habits of grief, of looking through drawers and playing old records, of finding hidden aspects of the one who has gone. That's where Starfish takes an astounding turn from lyrical indie elegy into more arcane territory.

If The Mist had concentrated more on the ache of a fractured heart than on the terrors of humanity's inhumanity, it would be Starfish. There are horror elements, yes, and monsters, and grisly fates that didn't take the intervention of uncanny forces. But it's really more about Aubrey's path to some kind of emotional resolution than going out and hunting beasts. The mixtapes that Grace has left behind become parts of a puzzle, one that debunks the idea of grief as a series of stages and instead points to it as a reassembling, one where sometimes you have to take everything apart and put it together again, and maybe you don't have all the pieces, and pieces from other puzzles appear (Grace's death is not the only loss with which Aubrey must contend). It's free-flowing, format-busting dark vibrancy is reminiscent of psychedelic horror master Panos Cosmatos, making this the Mandy of sorrow.

White brings an incredible freshness to the well-trodden postapocalyptic genre. Starfish flips from introspective drama to Lovecraftian creature feature to pastel-tinged animation without ever losing coherence. Much of that depends on Gardner, who has a small town to herself as she wanders through the emptiness, trying to find something or someone in this void that is her new normal. In her unhappy, detached wanderings through this strange new world, there's some of the same mixture of arcane creatures and existential angst that defines Mike Mignola's Hellboy comics, but which none of the cinematic adaptations of have ever reached (Guillermo del Toro was too fascinated by the idea of monsters as men, while the recent bastardized cut of Neil Marshall's version was stripped down to just gore and action). Aubrey's quest to soothe her hollowed-out heart is as touching as the giant beasts that roam this landscape are awe-inspiring, and as vision-expanding as the dimension-hopping denouement. 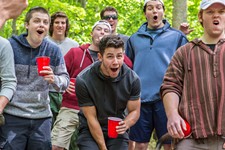