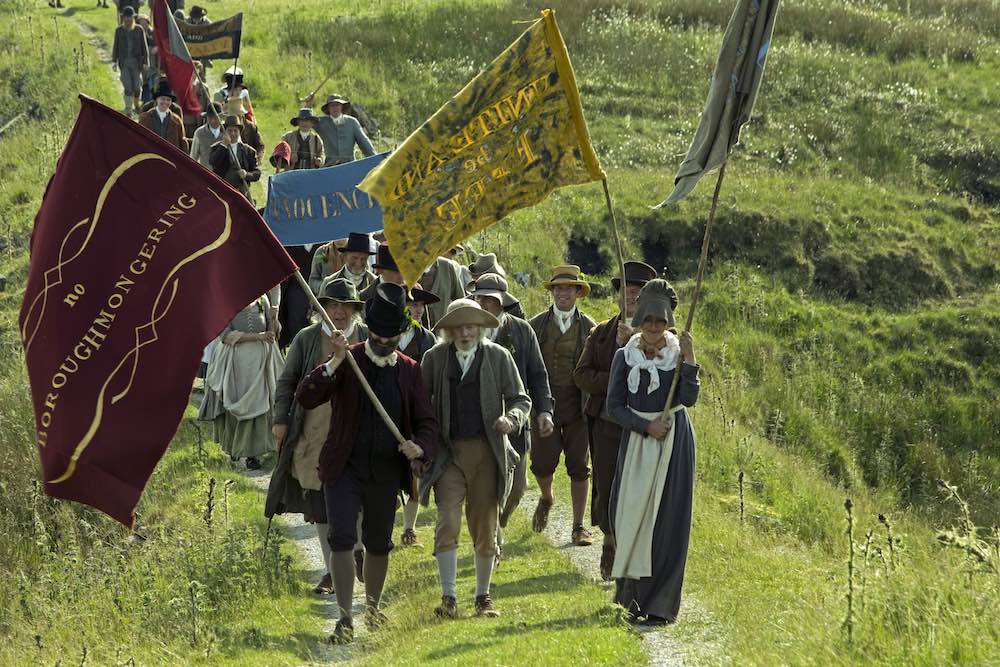 The Peterloo Massacre is a thick, dark scar in British history. In 1819, cavalry officers charged into a mass political gathering on St. Peter's Field in Manchester, butchering over a dozen protestors and mutilating hundreds more. Those bloody hours changed the direction of a nation's politics, triggering greater repression of the poor, but also spurring the growth of democratic activism, the rise of trade unions as defenders of workers' rights, and the birth of a new wave of paternalistic advocates who saw that oppression was evil.

It would clearly take a director with the cachet and recognizability of Mike Leigh to re-create both the massive crime and the political debates that split a nation. But everything else he brings to the narrative – his free-flowing narrative that becomes formless, his attraction to an oddly staid delivery, his devotion to historical precision that sacrifices emotional immediacy (a trade-off that never needs to happen) – remove any sense of connection to modern concerns. This was Kent State, Bloody Sunday, Matewan, Thibodaux, Charleston: Yet in his attempt to bring all aspects of the political and social background – from household arguments over corn practices to union meetings to early suffrage gathering on one side, to the backroom schemes of desiccated aristocrats and a parliament overseen by the bloated Prince Regent (McInnerny) on the other – to the foreground, Leigh turns an affront to humanity into a dry historical re-enactment.

Leigh is to be applauded for his dedication to accuracy – the distinctive Mancunian trill to the accents ("right" pronounced "reet," "sithee" for goodbye), the ear-shattering clatter of the cotton mills, the wild injustice of the courts and the carnage of the massacre itself – but accuracy cannot replace immediacy. His love of period pieces cannot overcome the sensation that this would have been better handled by his more politically adept peers, like Ken Loach or Costa-Gavras. There's a clumsy didacticism that might work better if he didn't run through dozens of superficially sketched characters, if there was anything or anyone to grab on to, and if he didn't dilute a sense of outrage with the sheer bloodlessness of the affair. Instead of a radical call to action, it's a long slog of wigs and oration. Another Year
Mike Leigh directs this brilliantly acted film about the loneliness experienced by those shut out of the family circle.