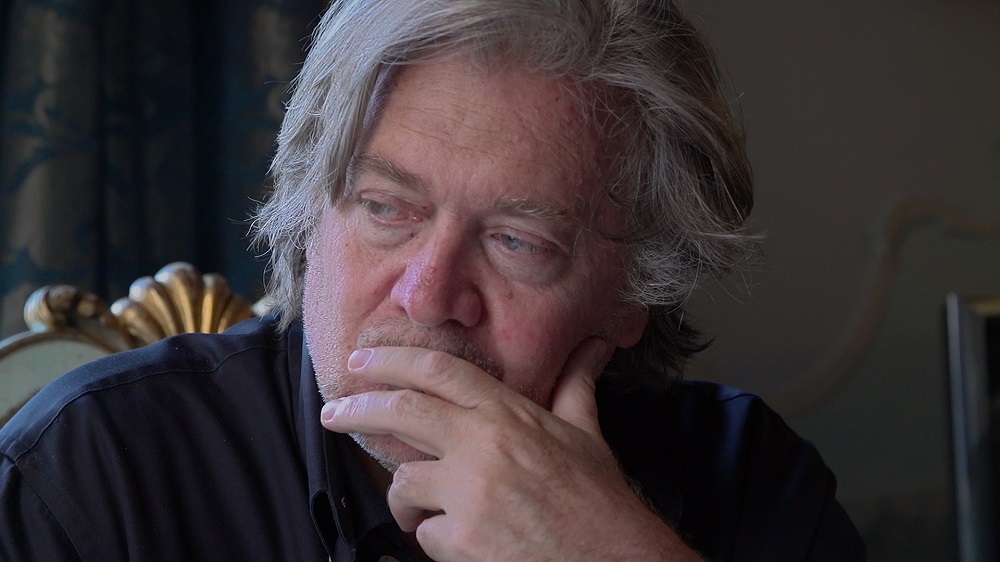 Steve Bannon faces a dark curse. The man who thinks he is reshaping the world will probably die knowing that he was nothing more than a cut-price Otto von Bismarck. The chancellor of Prussia who destabilized Europe to build the modern German state thought he was greater than the tides of history and the people he saw as lesser than him. Bannon, who engineered the construction of Donald Trump as a political monster, is caught in The Brink as a man who has successfully built himself up as an éminence grise. Yet at the same time, he is shown as such an egomaniac that he has forgotten to hide behind the curtains of power.

Like Bismarck's falling out with Kaiser Wilhelm II, Bannon has now been somewhat exiled from Trump's White House. So director Alison Klayman (Ai Weiwei: Never Sorry, Take Your Pills) follows him on his 2017-18 world tour, as he tries to bind together an unholy international axis of populists (read: crypto- and not-so-crypto-fascists) into his suitably ambiguously named new transnational force, the Movement. (For a man who claims he opposes globalization, he sure exerts a lot of energy into creating a New World Order – one in which he is on first-name terms with the new bosses.)

With remarkable access, Klayman is prepared to let Bannon hang himself with his own words: But then, is it that remarkable? The Brink actually includes the premiere weekend of American Dharma, the other Bannon doc shot after the 2016 elections, that one a more prosecutorial take by Errol Morris. Bannon, with his love of the camera, clearly believes that he is above all, and so always leaves himself open to cross-examination, because he believes he will always win. Yet, bar a few out-of-frame interjected questions, there are few moments in The Brink during which he is pushed to truly defend himself. So the most powerful sequence is when Paul Lewis from The Guardian simply confronts Bannon in an interview. The facade cracks, and in less than five minutes the mosaic of contradictory statements, half-thoughts, and messy faux-intellectualism that Bannon has built up as the Bannon persona falls apart. Everyone else is stupid, everyone else has forgotten what was really said, everyone's wrong when they say nationalism inevitably means ethno-nationalism; and so whenever he faces the kind of questioning that most local elected officials face every day, he is shown as a straw man.

Where The Brink is chilling is when he is surrounded by his fellow travelers – the oligarchs, plutocrats, and fascists who stand to gain from him, the racists and dim bulbs who lap up his every word. Klayman shows that Bannon has positioned himself as the middleman behind a growing international network of reactionary forces that want to carve up the world along clearly demarcated lines, like a game of Risk at stalemate. But there's little to explain why Bannon wants this – or even if he truly believes what he is touting.

Of course, the true danger is in fulfilling that last stage of Bismarck's legacy. The Prussian's actions lead to the First World War. Bannon's call to throw the world into a new era of chaos seems troublingly likely to encourage a similar conflagration. Ai Weiwei: Never Sorry
Alison Klayman's doc is as much a rallying cry for freedom of expression as it is a portrait in progress of an artist whose career is ongoing.