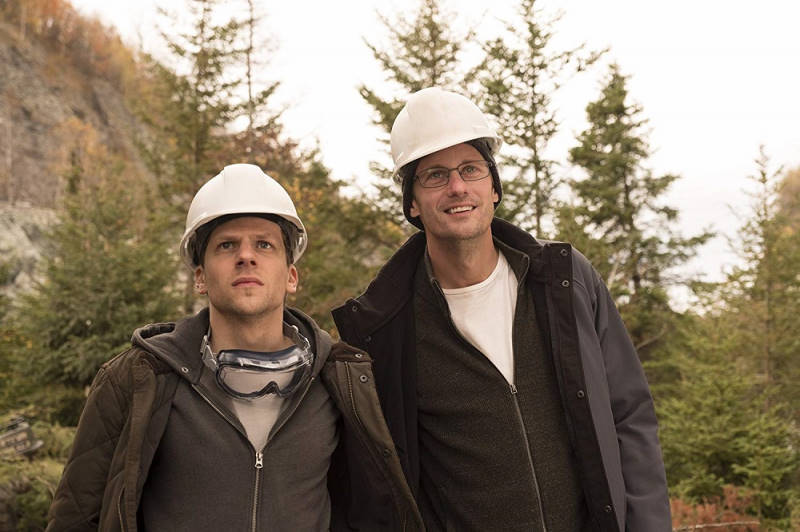 Fortunes, the old wisdom goes, can be lost in the blink of an eye. Technology has made that redundant, as the stock market targets profits made in milliseconds. That's the world of high-frequency traders, who buy and sell shares in instants, and The Hummingbird Project, by Canadian filmmaker Kim Nguyen (War Witch), spins off the real-life fight to create the fastest possible data link, allowing investors to get that imperceptible edge. The true story, as captured in Michael Lewis' 2014 exposé Flash Boys, was the fight between Spread Networks, which built an 827-mile fiber cable from Chicago to New York, and a line of microwave towers; in The Hummingbird Project, it's a 1,000-mile straight line from the Kansas City Internet Exchange to New Jersey, where cousins Vincent (Eisenberg, twitchy, damaged, and seething) and Anton (Skarsgård, unrecognizable as the lumbering, awkward genius) plan to make a fortune. The only problem is that there is no line, so they have to build it. Or rather, Vincent shuffles between mountains and boardrooms, drill teams and angel investors, while Anton shuffles around his hotel room, splicing cables and trying to find a way to shave off a millisecond from the signal processing. Grounding their respective madnesses is Mando as Mark Vega, the engineer used to seeing obsession turn pipelines into money pits.

Honestly, there probably hasn't been a drama about the economics and morality of commercial infrastructure investment this deep since Wall Street, and the dearth has been because it's hard to make it exciting. So Nguyen goes instead for a mixture of instructive and authentic, given added emotional heft by Eisenberg and Skarsgård as second-generation migrants with something to prove in an industry where employees go from well-paid to disposable in moments. In moments like this, it's less Wall Street and more Prince Avalanche, a very personal story about unspoken family intimacies; it's simply laid over a broader, more unstable business thriller.

As their former boss, Eva Torres, Hayek would be cartoonish if the tech industry wasn't littered with megalomaniac upper management that spend all their time telling researchers that their boss is their one true friend and protector. The only thing the film arguably gets wrong about her is that she's not wearing Christian Louboutin heels, the uniform shoes of C-level execs. However, not everyone evades the elements of pastiche and on-the-nose moralizing, most especially Heldenbergh as a thematically useful Amish leader who refuses to give up his land (that said, Mohawk and Letterkenny star Horn flies above the prosaic part of a barmaid who teaches Anton an important life lesson).

For its flaws, this is Nguyen's way of recalibrating how we look at what contemporary tech culture is doing, and the idea that throwing money at a problem solves everything. Even with those unsubtle moments, the director never points out the impressive insanity of drilling a 4-inch tunnel halfway across the continent, but instead lets the audience do their own work.

What makes The Hummingbird Project so intriguing is that it explores areas of business – and of industrial espionage – so esoteric that it's hard to imagine that it's really a business model. The idea that a one-millisecond advantage could mean literally billions in raw profit is mind-boggling. Throughout the construction project, Anton keeps wishing he could get back to his dream project, data transmission through neutrinos (an idea that seems like pure science fantasy, but was first successfully achieved in 2012 – the year in which the story is set). Yet it's never made to seem ludicrous: Much like the drilling project, it's impossible when you look at the whole process, but broken down into chunks, it – and the people chasing this insane dream – becomes explicable. 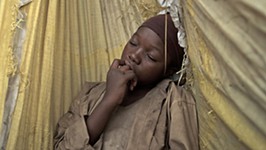