A love triangle emerges amid the ruins of 1945 Hamburg, Germany, in this well-appointed but stale postwar drama. Five months after the end of hostilities, Rachael Morgan (Knightley) comes from England to join her husband Lewis (Clarke), a British colonel in the Allied Occupation forces. They haven’t seen each other in several years, but there is a distance between the two that can’t be accounted for by mere unfamiliarity. He is a strong, silent sufferer, as we learn from the hardened face he wears as he sits stoically in the back seat of his chauffeured car while surveying the cold, starving German civilians trying to survive in the bombed-out city. She has taken up smoking because her doctor has told her it might be good for her nerves. The couple has been ordered to live in a mansion requisitioned by the Occupation from Stephen Lubert (Skarsgård), a former German architect, who lives there with his daughter Freda (Thiemann) but is now relegated to the attic. Yes, even though the Morgans have reunited in this divided house, their marriage is far from restored, despite outward appearances.

Speaking of outward appearances, they are the saving grace of The Aftermath. The film, directed by James Kent (Testament of Youth), is lovely to look at, and the costumes by Bojana Nikitovic may be the most engaging part of the movie. Keira Knightley stuns in every knit set and bias-cut gown she dons. As she swans around the largely empty mansion, the viewer is likely to recall her in other, better period costumes such as in Atonement. Lewis is rarely out of his drab uniform but Stephen’s worn cable-knit sweaters practically scream to be yanked off by someone anxious to get at the hunky goods hidden below. Rachael hates all Germans (she has her reasons, which are revealed in the course of the film). Stephen resents the occupiers but hates the Nazis, and his daughter Freda, a teenager, harbors more than the usual indignant self-righteousness typical of her youth. That Rachael and Stephen’s antipathy would turn to passion is evident from the start. What hasn’t been clear up until that point is how risible and cliched their adulterous romance will be.

The sadness harbored by all the film’s characters is evident. Their passions, however, stem from ginned-up claptrap about love and hate being opposite expressions of one overwhelming emotion which can also substitute for each other. When Rachael and Stephen’s hatred bubbles over into a spontaneous first shtup on the dining room table (with no regard for others who might enter the room) the scene is more laughable than amorous. The screenplay by Joe Shrapnel and Anna Waterhouse, from a novel by Rhidian Brook, strands the characters with nothing but obvious and ill-developed reasons for their actions. The Aftermath wants to be a great war romance, but it’s stuck inside of Hamburg with the Casablanca blues again. 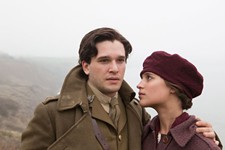