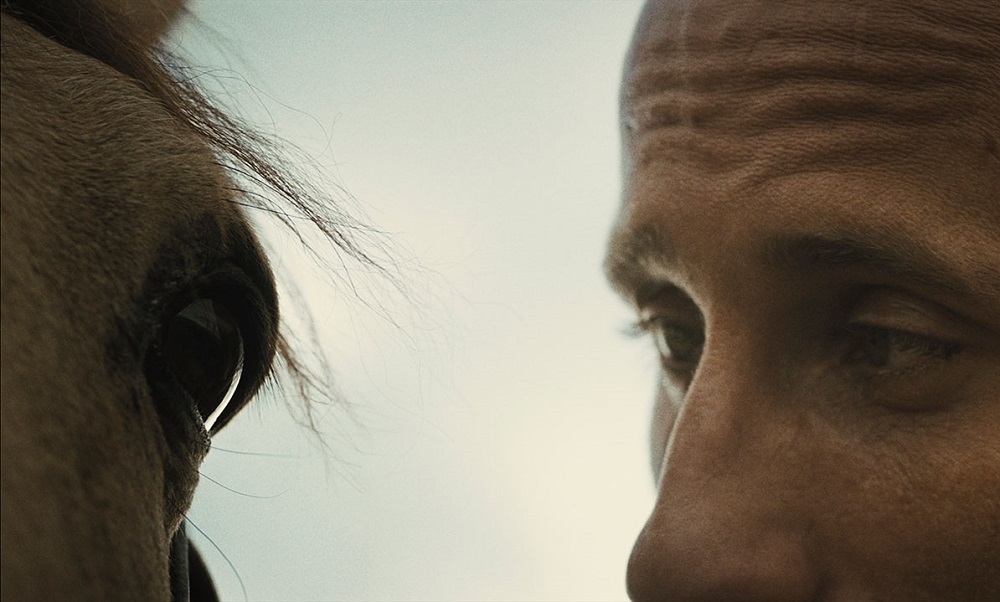 If the opening sequence of The Mustang calls anything to mind from our collective cinematic past, it's the ending of 1961’s The Misfits. Lensed in northern Nevada’s Pyramid Lake region on the very same desolate location – Mustang Flats – made famous by Huston, Gable, Monroe, and Clift, director Clermont-Tonnerre substitutes a helicopter for Eli Wallach’s battered biplane, yet the goal remains the same: the roundup and capture of the Silver State’s famed wild mustangs, current population estimated by the Bureau of Land Management at 40,000 or more. The Misfits, of course, ended up becoming Gable and Monroe’s melancholic swan song. The Mustang, Clermont-Tonnerre’s impressive debut feature, is a slow-burning, tightly coiled character study of felony offender Roman Coleman (Bullhead’s Schoenaerts).

While serving out his time at the Northern Nevada Correctional Center, Roman finds something close to redemption when he’s offered a chance to join the prison’s wild horse training facility. Overseen by program head Myles (an irascible Dern), Coleman is paired with an “unbreakable” stallion, which he dubs Marquis. Astute viewers will see where this is going – both man and horse have anger management and conflict resolution issues – but Schoenaerts’ gradual transformation from a taciturn yet seething golem of a man into an actual empathetic human being is a masterful performance. Dern is always a welcome presence in any movie, and his flinty old timer/die-hard cowboy is yet another marvelous notch in his saddle.

Director of photography Ruben Impens camera makes spectacular use of the looming Sierra Nevada mountains. Coupled with the lake bed’s sudden alkali whirlwinds, the desert’s cacophonous weather, and composer Jed Kurzel’s forlorn score, The Mustang is a microepic of the lost and the found.