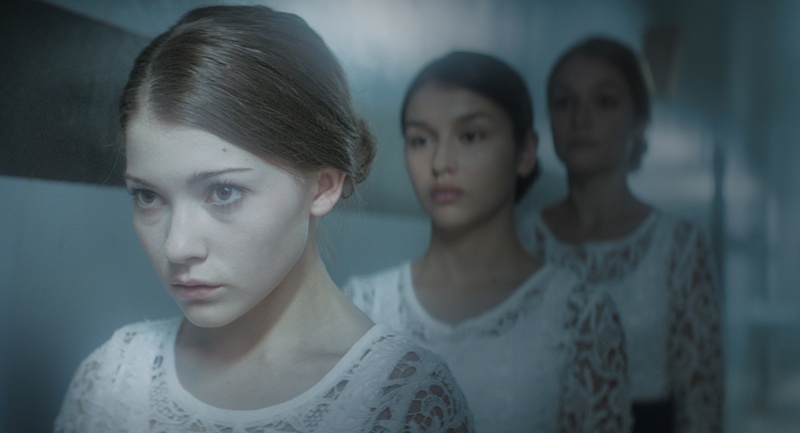 I guess things just aren’t bad enough, as there’s no dearth of films that imagine an even bleaker existence than what’s in front of us. (It’s an odd form of escapism, huh?) Debuting at last year’s Fantastic Fest, Level 16 is a mystery horror that gets darker as it unravels. In an act of quick submersion, the film opens on the hallway of a boarding school (one that has the atmosphere of a parking garage), and there’s a line of girls waiting to wash up in an awkwardly placed sink while a male voice preaches the importance of cleanliness.

It’s never explicit, but there’s a biblical emphasis that echoes The Handmaid’s Tale. There’s also an underlying Victorian rhetoric as the girls are expected to adhere to the “virtue” of obedience whilst avoiding “vices” such as curiosity, anger, and sentimentality, as those lead to “hysteria” (and we can’t have that). They’re kept indoors away from the supposedly toxic air and never get to see sunlight. Any girl who doesn’t follow the rules is dragged to the basement of the building and punished by the guards. The ostensible reason for all this severe “training” (there’s a touching moment when it’s made clear that the teenagers can’t even spell their own names) is that the girls, orphans presumably, will be adopted by rich, “top society” families once they reach "Level 16." Luckily, there are a couple of rebels in the bunch that question the zero sense that all makes. Taking a great risk, Vivien (Douglas) and Sophia (Martin) forgo their nightly “vitamin” to observe the institution’s nocturnal activities. And they are, as you might imagine, disturbing enough.

What follows isn’t the typical jump-scare fare; instead, the action unfolds with a sense of dread and unease, reliably punctuated by the limping scrape of the metal-plated boot of the guard with the darkest heart. There’s a building toward the inevitable, but it’s not boring/predictable. It’s more like a presentiment that has you saying, “No, no, no, no” under your breath with each new awful thing. It’s clear that all of the girls – Ava, Rita, Olivia, Hedy – are named for classic movie stars, all of whom have been marked by the trouble in their lives. The film has a way of circling back on its own gags in case you missed them the first time around. The obvious message is a warning against an unhealthy obsession with youth and beauty to a society that prefers it if women just sit down and shut the fuck up. To that we say: Nolite te bastardes carborundorum.