When a film hits the market ahead of reviews – often because the studio elected not to screen the movie for critics – this is often seen as a vote of no-confidence by the distributor. Most of the time they’re even right, but every so often, a film proves itself to be far better than anyone had suspected. So is the case with Captive State.

It’s been nine years since Earth surrendered itself to the Legislators, an extraterrestrial invading force, and life has gotten back to some semblance of normal. In exchange for access to our underground resources, the Legislators let humanity look after itself; this is the job of William Mulligan (Goodman), a Chicago law enforcement officer who believes a terrorist attack is on the horizon. To prove his theory, Mulligan enlists Gabriel (Sanders), the working-class son of his former partner, in the hope that Gabriel will lead him to the location of his revolutionary older brother Rafe (Majors).

When Captive State makes its inevitable streaming appearance, some will turn the film off during its first 30 minutes. It’s hard to blame them. Wyatt and his co-writer Erica Beeney have crafted a somewhat directionless first act, introducing a half-dozen dour characters and hinting endlessly at what may be happening behind the scenes. Then things snap suddenly into place. Captive State moves into its back-half with a prolonged espionage sequence, sidestepping its leads in favor of a group of secondary characters as they ready themselves for the assault on Soldier Field Stadium.

Here, Captive State is transformed from middling science-fiction into a Seventies espionage thriller, cross-cutting the actions of a small group of terrorists against the screaming masses of the Unity Day celebration. No detail escapes the filmmakers’ eye; we are treated to every element of the assault, from the collection of materials to the sudden pivots required when things go wrong. The result is a prolonged heist scene so sharp  and so meticulously paced  that any complaints about the film’s opening are soon forgotten. As humanity hunts its own, the film begins to peel back its layers, leading to a deeply satisfying – if not somewhat predictable – final few twists and turns.

At its best, Captive State blends imaginative science-fiction with the caliber of detail-oriented espionage you might find in an Alan J. Pakula film. The surprise here is not that the film achieves these heights; it’s that it confidently maintains them for most of the film’s second half. Here’s hoping Captive State finds the audience it deserves one way or the other. 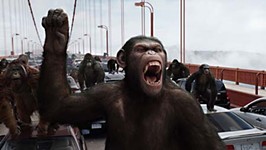 Rise of the Planet of the Apes
The special effects in this prequel may be infinitely more elaborate, but they hold little of the charm and "humanity" of the original.