It will be 50 years ago this summer that Americans first walked on the moon. Although the event has been a subject dear to filmmakers since Georges Méliès made “A Trip to the Moon” in 1902, it’s safe to say that audiences haven’t seen a film like Apollo 11 until now. This feature-length documentary takes us inside the event with footage that’s never before been seen or heard. It’s a celebratory movie designed to rekindle awe and admiration for the accomplishments of the NASA astronauts and ground scientists, as well as a reminder of the endless realms of possibility that can be achievable when a country and its politicians work in unison toward a shared goal.

Director Todd Douglas Miller (Dinosaur 13) assembled Apollo 11 from a trove of newly discovered 65mm footage and 11,000 hours of uncatalogued audio recordings. Painstakingly, the audio was matched up with the soundless footage of the scientists monitoring their computer stations in the Mission Control Center. This adds to the sense of the accomplishment being the result of a community’s efforts rather than the just the heroic actions of three brave astronauts: Neil Armstrong, Buzz Aldrin, and Michael Collins. NASA cinematographers filmed everything, not only the Mission Control scientists (all men, most of whom wear short-sleeved, white, button-down shirts and ties appropriate for Houston in mid-July), but also the mechanical workers prepping things on the launchpad platforms and catwalks. Also filmed were the crowds that assembled on the nearby beaches and parking lots, providing not only a sense of late-Sixties style and fashion but also the feeling of a populace unified in fear and pride around this one event (even though once in a while on a radio or TV we hear progress reports from the Vietnam battlefield and news of Ted Kennedy’s contemporaneous crash at Chappaquiddick).

Apollo 11 is free of extraneous narration, which helps lend it a present-tense feel. We hear snatches of John F. Kennedy’s 1961 inaugural speech, which issued the challenge to land on the moon before the end of the decade, as well as avuncular Walter Cronkite setting up the mission’s objectives. The electronic music by Matt Morton can be overwhelming at times in its attempt to heighten tension. Also, the restored communications between land and sky, despite their historic value, can often resemble the scratchy sound of sitting too long at a drive-through squawkbox. No mention is made in the film of the U.S./Russian space race that drove the less lofty goals of the mission. Instead, Apollo 11 leaves us to ponder those words left behind on the moon with the American flag: “We came in peace for all mankind.” Come to think of it, that’s not such a bad reminder as we face the imminent possibility of a military-based Space Force. 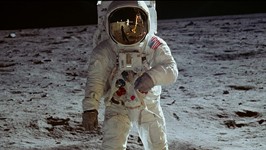