The Book of Ecclesiastes sums up human mortality in earthy terms: From dust we are, and to dust we shall return. In this surprisingly shifty drama laced with grim humor, a recently widowed Orthodox Jew (Röhrig) obsesses about the rate at which his deceased wife’s interred body will decompose, haunted by a religious belief that her clinging soul will suffer spiritual torment until her remains completely return to the soil. To compound this distress, Shmuel is unnerved by vivid nightmares in which a demonic dybbuk of Hebrew mythology emerges from his spouse’s decaying cadaver – the big toe of her left foot, to be exact – to the point of nearly going mad. Unable (and unwilling) to find solace in more conventional ways, the grieving widower enlists the aid of the recalcitrant Albert (Broderick), a sad-sack community college science professor, to participate in a wildly unorthodox scheme that involves killing and burying a proxy pig to gauge the speed of his dead wife’s decomposition. It’s the little-known stage of grief that Elisabeth Kübler-Ross apparently overlooked.

The movie begins on a solemn note, following the traditional burial performed according to Jewish custom. Shmuel’s grief is profound; he mourns like a wounded puppy, overwhelmed by loss. But as To Dust progresses, something unexpected happens. The sneaky screenplay by Jason Begue and director Shawn Snyder evolves into a dark buddy comedy about an odd coupling of rationality and irrationality, one in which you’re cringing one moment and chuckling the next. The running joke here is a slowly rotting swine, hardly the stuff of movie storylines. You could probably interpret this biology lesson is a metaphor for something, but the ballsy pleasure of the unusual premise is its own reward, even during the movie’s more incredulous and shocking moments.

Despite his widower status, Shmuel is often an unsympathetic character. He’s maddeningly demanding, manipulative, and stubborn, single-minded in his frustrated attempt to determine the postmortem state of his departed spouse. Röhrig’s performance bravely embraces those flaws, even using them to comic effect in a blank stare responding to Gentile cluelessness. (The most deliciously absurd moment in the film comes when a female security guard assures Shmuel that Jesus loves him after hearing about his wife’s death.) It’s only when this unworldly man begins to assimilate during a cross-country trip to a Tennessee body farm littered with corpses (yes, there’s such a place) that the role begins to cater to the audience. The real delight here, however, is Broderick’s mensch, a middle-aged man painfully aware that he’s become a loser. A schlubby guy who sits in his apartment each evening smoking pot in his ex-wife’s frilly housecoat, Albert is a grownup Ferris Bueller gone to seed (his distressing inability to pronounce words and names is a genius character trait). Broderick’s spot-on performance replete with familiar mannerisms and line deliveries in To Dust is a bittersweet thing, reminding you how much you’ve missed seeing him on the big screen. 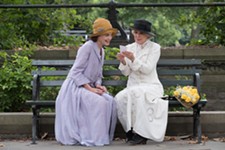