How to Train Your Dragon: The Hidden World

For all its tenderness and care in handling, DreamWorks Animation’s How to Train Your Dragon series has never shied from imparting hard truths to its young audience: that actions have consequences, that parents sometimes disappoint their children, that loving is hard and loss is inevitable. The Hidden World drops the toughest truth yet: that we don’t deserve dragons. That may sound like a renunciation of the series’ very foundation, a strikethrough to the title’s “train” and even “your,” but it’s a case to which the whole series has been building.

Based on Cressida Cowell’s book series and decisively concluding (on film, at least) with this third installment, The Hidden World touches down again on the Isle of Berk, a Viking community that used to spend its time killing dragons, until the gangly, wisecracking Hiccup (voiced by Baruchel) bonded with a wounded Night Fury he dubbed Toothless and convinced his clansmen that dragons and humans could live peaceably together. That message, alas, never caught on beyond their small crag, and so the people of Berk, led by now-chieftain Hiccup and his wise, warrior girlfriend Astrid (Ferrera), regularly lead raids to liberate caged dragons and bring them back to an increasingly crowded Berk – raids that have drawn the attention of Grimmel the Grisly (Abraham, by way of Transylvania), a dragon hunter hankering for Toothless’ pelt as prize. Hiccup’s solution? Relocate the clan and its fire-breathing friends to a maybe-mythic “hidden place” of folk tales past.

The Hidden World, as with the previous films, is a very busy thing – a boon when it comes to background detail and its realistic picture of a village humming with activity, a bust with the ever-dopey “comic relief” sidekicks. (Their names – Fishlegs, Snotlout, Tuffnutt – are their best feature; I still can’t tell any of them apart.) Most animated features, at least the ones directed at kids, lean on busyness, but what series writer/director Dean DeBlois does with quiet is what makes these films so exceptional, borne out in thoughtful conversations and, most especially, in scenes entirely without words – stunning, cinematic flights and earthbound pas de deux between Toothless and the female Night Fury he woos. These dragons are rendered so expressively, and they have become so dear. We may not deserve them, but that doesn’t stop the heart from wanting. 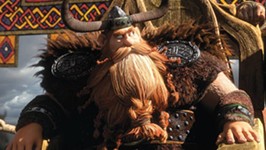 How to Train Your Dragon 2
You'll want a dragon of your own after seeing this animated sequel that surpasses the original.

How to Train Your Dragon
Soaring animation should make this story about a Viking boy who befriends his enemy a perennial favorite.

How to Train Your Dragon: The Hidden World, Dean DeBlois