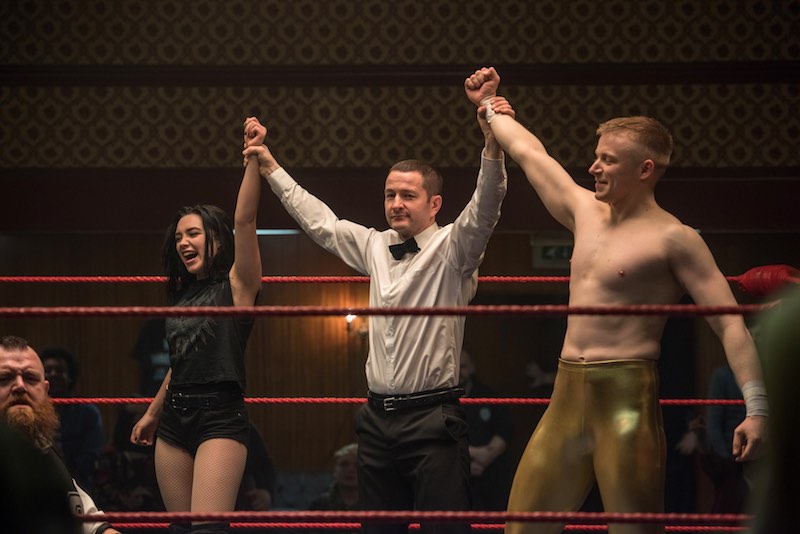 Fighting With My Family

It seems off to say, but Fighting With My Family – the biopic of trailblazing WWE superstar Paige – is a pro-wrestling movie more for non-wrestling fans than those that love sports entertainment. That is far from a criticism because, while it's remained as much of an American pop culture institution as soap operas and HBO, wrestling is seen as a lesser art form, so any crossover is a big win.

The merits of wrestling can be left to another day, because British director Stephen Merchant finds the simple heart and soul of a rags-to-riches true story. Paige (played with spiky energy and self-doubt by Pugh) grew up in a wrestling family, but not like the multimillionaire McMahons who run the WWE. The Knights put on shows in half-empty pubs in the British town of Norwich (sort of the UK's Pittsburgh), with gregarious ex-con and paterfamilias Ricky (Frost at his gruffest and bluffest) and Julia (an unrecognizable Headey) booking their kids Saraya (Paige's real name) and Zak (Lowden) as a tag team and against each other. Their dream is to make it to the WWE, the globe-spanning powerhouse that rules wrestling, and they think they've managed that when the company does tryouts in London. Unfortunately, life has other plans, as Paige gets the call to go to Orlando and train as part of the WWE's NXT developmental program, but Zak gets left behind.

It's a fairy tale with a twist, complete with The Rock as himself in a fairy godmother role (not to be confused with his ill-considered early foray into film alongside Merchant in Tooth Fairy). As much as Pugh drives the film as the 18-year-old Paige, the goth outsider in a world of bleach-blond models and cheerleaders, Lowden provides just as much heart as Zak, flailing around in his life after rejection. For its multiplex-friendly tone, Fighting With My Family has some tender insights into what it's like to miss out on your dream, or the unexpected burden of seeing it fulfilled.

Now non-wrestling fans might want to tag out here for a second while I talk to those who follow the glories of the squared circle.

OK, so here's the bottom line. This is arguably the best movie about the WWE since Barry W. Blaustein's critical love letter, 1999's Beyond the Mat. However, this is a WWE release, which places it in an awkward spot. While it never pulls any punches about how hard life on the main roster is (a point put over by Vaughn's Hutch, an amalgam of several NXT trainers including the late, great Dusty Rhodes), it still portrays the house that Vince McMahon built as the be-all, end-all. Which, to be fair, it was in 2014, but with the growth of the independent circuit, the revival of rival TV promotions like Ring of Honor, New Japan Pro-Wrestling, and All Elite Wrestling, is no longer the case. Plus, this being a period piece, there's the awkwardness of seeing the old Diva's butterfly belt. It's a painful reminder that Paige helped elevate the women's division but, due to her career being cut short by injury, never truly benefited from that transition.

In creating a script that is designed to appeal to the non-wrestling audience, Paige's career is truncated. NXT is conflated with the Performance Center, and her entire record-setting title run is omitted – as are her tours with non-WWE promotion. There are also weird, tiny inaccuracies that are just wrong enough to be glaring, like Paige wearing the wrong ring gear in her career-defining match with AJ Lee. As for the use of look-alike actors to play wrestlers, well, if you can afford to get Big Show and Sheamus in for cameos, would it really be that tough to get Pete Dunne in to play Pete Dunne?

That said, Merchant's script – based on the Knight family documentary "The Wrestlers: Fighting With My Family" – gets the heartbreak and struggle of being an independent wrestler who ends up in the churning machine of developmental fundamentally right. The wrestling itself is solid, with Tessa Blanchard (herself a third-generation wrestler) adding credibility as Pugh's body double. She even nails the slight botch on the "Paige Turner" in the re-enactment of Paige's Monday Night Raw debut.

OK, non-wrestling fans, you can come back in now. Fighting With My Family may cut a lot of corners, but it's honest and earnest and heartfelt. Every omission or alteration makes sense, and keeps the focus on Zak and Paige. It may be a simple, old-fashioned, underdog-gets-their-day, feel-good story, but it sure as hell will leave you feeling good.