Some people are born for violence. Some have violence thrust upon them. And some just like the way it feels when you smash someone's face in. It seems like everyone in the remorseless and relentless Donnybrook sees no possible ways out except for bloodshed, so the closest the story can find to a hero is Jarhead Earl (Bell, all sinews and thousand-yard stare), who at least believes his fists can buy a better future.

In this mournful, Rust Belt elegy, that makes him virtually an angel in contrast to Chainsaw Angus (Grillo, at his most cut since MMA drama Warrior), who most regard as the devil incarnate. A meth dealer locked in a (possibly unconsummated) incestuous relationship with his sister Delia (Qualley), who is herself balanced between a cooly violent streak and depressed self-destruction, he regards himself as untouchable. That's where Whalen (Dale) staggers in, as the cop who's less bothered by the law than his own upended moral barometer.

The inevitable intersection of their paths is at the Donnybrook, a no-holds-barred bare-knuckle tournament held somewhere off the grid and beyond the law, with a $100,000 cash prize on the line. It's the closest thing to a sense of order in this hellish world, and the evils that the characters will perpetrate on each other are all just steps on the road into the cage.

Adapting Frank Bill's gritty first novel of the same name, writer/director Tim Sutton has seemingly gone even bleaker, even more miserable, even more determined to nail out every last inch of misery in the bleaching sun for everyone to see. The universe is chaotic and erratic and doesn't care for your sensibilities, he seems to be saying – but then, the same is true of his script. If it wasn't for the Donnybrook defining an endpoint, then the conflicts would have no real stakes or payoff: Which is fine for Earl and Chainsaw, but Whalen often feels like an afterthought, carrying a B-plot when he needs to be an equal force.

As a depiction of the lowest ebbs of what is written off as flyover country, Donnybrook doesn't lack for empathy for the truly unsympathetic. What is in short supply is any sense of direction. It lacks the pained intensity of Winter's Bone (and also the raw appeal of Jennifer Lawrence and John Hawkes at their best), but then it doesn't have the grisly surrealism of another backwoods cousin, 2016 Mississippi River revenge drama My Father Die. It depends on its grueling hardships, on a sense of inevitability that Earl's and Chainsaw's fates will inevitably be settled in a rusty cage, with a bunch of baying neo-Nazis waiting for bloodshed. It may be written off as misery porn by those who have never lived anything like it, and be too gallingly close to the truth for those who've walked near to this terrible fire. 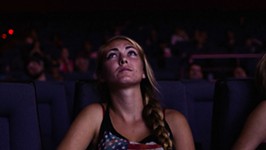