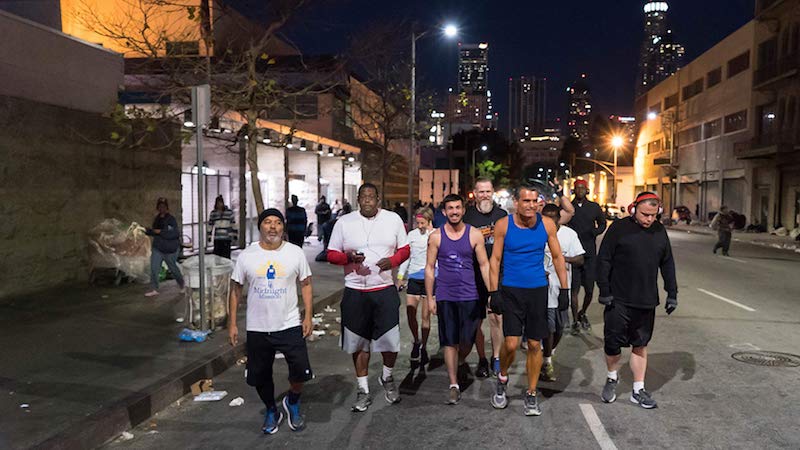 “One horrendous act does not define a person in his or her entirety,” says Craig Mitchell, a criminal judge on the superior court of Los Angeles. An avid (and at times fanatical) runner, Mitchell began a running club for the denizens of Skid Row (pop. 4,500 and counting). More specifically, he works out of the Midnight Mission, a nonprofit center housing and treating addicts and alcoholics trying to get clean and get another chance. Mark Hayes’ Skid Row Marathon charts his philanthropy with a half-dozen portraits of people who have been touched and often redeemed by Judge Mitchell and his seemingly endless reservoir of energy and compassion.

The doc shadowboxes a bit around Mitchell’s motivation. As a judge who regularly hands down life sentences to young men, it’s easy to see how this endeavor is a counterbalance to the justice he has to mete out on a daily basis. Yet the film is more concerned with the stories of the various people Mitchell has attempted to save (an apt word, as in one telling bit of info, it turns out Mitchell wanted to be a priest). The runners include Rafael, a parolee who is trying to get out of the shadow of a life sentence for first-degree murder; Rebecca, a single mom whose substance abuse left her and her son homeless for years; and David, an extremely talented artist who flits around the group before eventually embracing it. Then there is Ben, once a guitarist for a Sunset Strip rock band, who is using the program to course-correct his life by applying to the San Francisco Conservatory of Music.

And then there is the running. Constant running. The group prepares first for a marathon in Ghana, and subsequently, one in Rome. Mitchell uses donations and his own income to finance these trips, and buy equipment for the men and women. There are relapses, and Mitchell’s own health comes into question – neck and back issues adding much pain to his passion. That’s an apt summation of Skid Row Marathon, a feel-good film that uses hope, kindness, and generosity (if a bit austerely) to convey this strong message that releases endorphins as strong as any runner’s high.