Music scenes crumble. It's an inevitable rise and fall, when someone gets a major label deal, or a day job. But the implosion of the Norwegian black metal scene was like no other: On Aug. 10, 1993, Varg "Count Grishnackh" Vikernes, former bassist with black metal pioneers Mayhem, butchered the band's founder and guitarist Øystein Aarseth, aka Euronymous. The murder was the bloody end point to an era that went beyond teen rebellion and stretched through assaults, suicide, ghoulish rumors based in hideous truth, and the firebombing of several historic Norwegian churches.

Lords of Chaos (based on the book of the same name by Michael Moynihan and Didrik Soderlind) puts the viewer in the doomed boots of Euronymous (Culkin), a 17-year-old with a dream of pushing metal cliches into a twisted reality. His first prime collaborator, Per "Dead" Ohlin (Kilmer, a gossamer ghost on his own doomed path), is soon replaced by Vikernes (Cohen), an enfant terrible whose side project Burzum is the only music Euronymous loves more than his own. What starts as a typical tale of a hard-partying band soon collapses into a chaotic horror show, as Euronymous realizes that Grishnackh really walks the satanic talk, and the pair become locked in a struggle to become more evil than the other.

As the founding drummer/survivor of seminal Swedish black metal forebears Bathory, as well as an experienced filmmaker, writer/director Åkerlund should be the ideal person to tell this story. Instead, he is bifurcated: His intimate knowledge of the scene means he understands the details, but he is too close to the story to give it coherence. It's also a head-spinner when the extreme metal pioneer who later directed the video for Madonna's "Ray of Light" spends so much time obsessing narratively about posers vs. being "real" – the underlying tension here between Euronymous and Grishnackh.

The devil, it seems trite to say, is in the details, but that's where true crime stories must concentrate. The lack of consensus from the witnesses to the crimes that led to the murder means Åkerlund has to fill some gaps. More significantly, he tells us why Mayhem were so seminal (mostly through a clunky voiceover from Culkin), but bar one brief rehearsal and a re-created concert it's never really shown. The mandatory news anchors telling the world about the murder seem particularly bizarre, considering it was a footnote that only gained dark significance later. Mayhem was the underground that caused a tectonic shift still felt to this day. Outsiders may not get that from this film, while anyone who can tell corpse paint from Cannibal Corpse may be frustrated by the lack of detail and context (plus the addition of Ferreira as Euronymous' fictional girlfriend seems both egregious and heavy-handed). Yet Åkerlund's style, and his quietly sensitive handling of the bloody details, will still bang the head that does not bang. 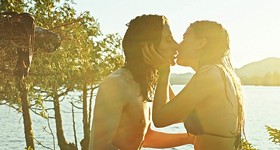 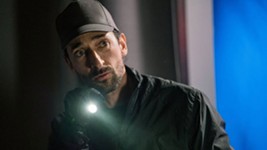