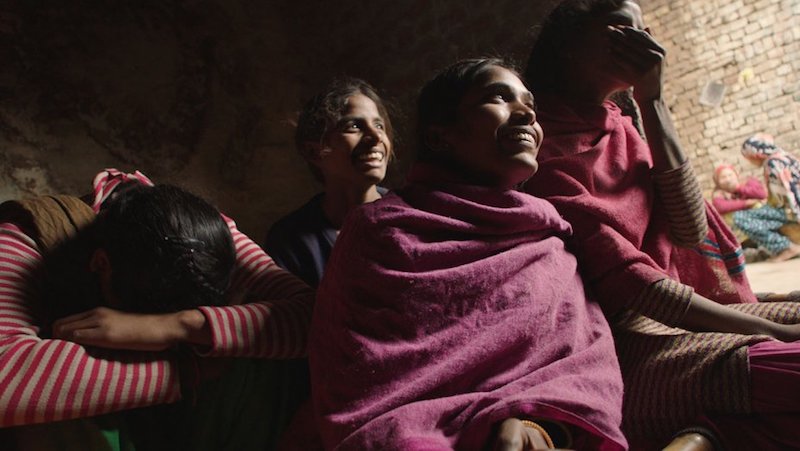 If there’s one underlying theme snaking like a main circuit cable of the dark heart through these five Oscar-nominated short docs, it’s love. A many splendored thing, yes, but here love is also madly splintered, twinned as it often is by the left hand of hate.

It’s unclear if director Marshall Curry intended the title of "A Night at the Garden" to evoke some lost Marx Brothers comedy, but intentional or not, the titular irony is thick enough to cut with a swordfish. Sans narration except for an expository endnote, the Garden in question is Madison Square: 80 years ago this month, some 20,000 Americans filled the hall to capacity in an unprecedented political rally in favor of Adolf Hitler. Replete with Nazi banners, iconography, and torch-bearers presaging recent events in Charlottesville, Curry's shocking sucker punch of a flashback documents the German American Bund’s mini-Triumph of the Will and by doing so draws dismaying, surreal parallels to America’s current anti-immigrant xenophobia.

Another shade of hatred of The Other, Ed Perkins and Jonathan Chinn’s "Black Sheep" tells the story of Nigerian-born Cornelius Walker. Speaking directly to the camera, Walker recounts how in 2000 his mother moved the family to Essex, England, in the wake of a race-related murder near their home in London. Desperate to avoid potentially lethal confrontations with the dodgy, patently racist neighborhood hooligans, Walker goes to extremes to not stand out. He adopts the local style and patois, wears blue contact lenses, bleaches his skin, and ultimately participates in violent beatdowns to avoid being targeted himself. “I wanted to feel love,” he explains. “So I made friends with monsters.”

A judgment-free love of life until the final breath is at the empathetic core of "End Game." Co-directors Rob Epstein and Jeffrey Friedman train their sense on San Francisco’s Zen Hospice Project, a mind, body, and spirit palliative care group of doctors, therapists, and social workers striving to ease their patients' path into the land beyond beyond. It may sound grim, but "End Game" is by far the most emotionally and intellectually human story in the quintet. Hankies and hope are recommended.

The final two short docs follow fellow humans at their most resourceful best against the worst of odds. Skye Fitzgerald and Bryn Mooser’s "Lifeboat" is a haunting portrait of German NGO Sea-Watch as its members put their own lives on the line to rescue imperiled refugees fleeing Libya via the unforgiving, often deadly, Mediterranean Sea. It’s humanity at its most heroic, backgrounded by harrowing sequences of homeless, tempest-tossed, huddled masses yearning not for Ellis Island but for the marginally less teeming shores of the EU. "Period. End of Sentence." by Rayka Zehtabchi and Melissa Berton chronicles the women of Hapur, Delhi, in their quest to gain respect, secure a modest financial footing, and break down rural India’s cultural and religious opprobrium against menstruation by manufacturing and distributing sanitary pads on their own. Dispelling stigmatization through their newfound trade, the women empower themselves while enlightening their husbands and brothers. “Usually brothers bring gifts to their sisters,” says one participant. “But today I bought my brother a suit. I got him clothes because now I have money.”