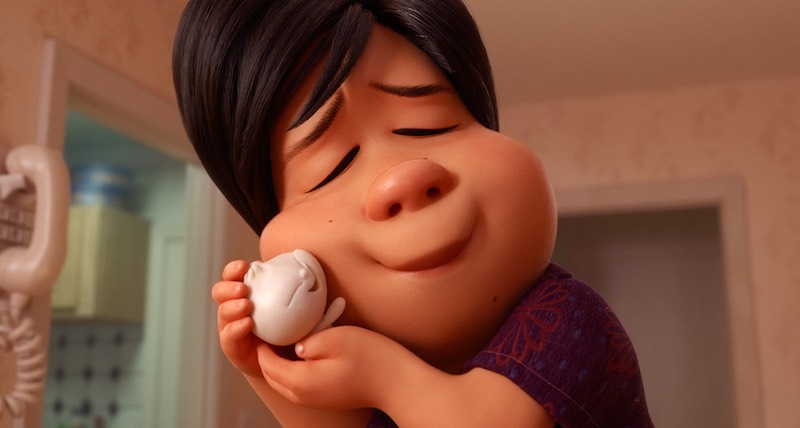 The five films nominated for the Academy Award for Best Animated Short are all fine examples of animation’s potential for unlocking experiences ill-served by linear and naturalistic storytelling.

The compilation eases us into its ulterior state of mind with a laugh. “Animal Behaviour,” directed by David Fine and Alison Snowden, is the funniest film of the lot. Within the setting of a group-therapy session, a leech with boundary issues, a praying mantis who has trouble finding a partner because of that sexual cannibalism thing (and her 1,000 babies), and an assortment of other socially maladjusted critters air their anxieties. Group therapy hasn’t been this amusing since Bob Newhart left the air. “Bao” is a somber fable about a Chinese-Canadian woman whose bao dumpling turns into a live boy, who all-too-too soon grows up and leaves. Directed by Domee Shi, the G-rated short ends happily. “Bao” was produced by Pixar and released in theatres in front of Disney’s Incredibles 2.

My favorite of the bunch is “Late Afternoon," written and directed by Louise Bagnell. Veteran actress Fionnula Flanagan voices the main character, Emily, whose age-related dementia causes her to drift back in time. A biscuit falls in her tea and she dives down into her past through the watery teacup, like a surreal Proustian Irishwoman searching for her lost madeleine. Another time, she slips from present to past through the rifled leaves of a book. The transitions are delicate and lovely, and with repetition, bring her back comfortingly to the present.

The transitions are also what make the other two films in the program memorable. Both are adult reflections on childhood terrors. Andrew Chesworth and Bobby Pontillas’ “One Small Step” presents a Chinese-American girl whose maturation can be tracked by her treatment of her footwear. Only when her attentive but underappreciated papa is gone does she learn proper shoe care and how to fulfill her dream of becoming an astronaut. Trevor Jimenez’s “Weekends” tells the story of a boy who shuffles between the homes of his newly divorced parents. The film is nightmarish, surreal, and normal in equal measures. It made me think of Paul Dano’s Wildlife, released last year, which perceptively details the breakup of a marriage as seen through the son’s point of view. Neither film would I recommend for children.